The BMW 2 Series Active Tourer’s engines also appear in the BMW 1 Series hatchback. You can choose between punchy 1.5 and 2.0-litre diesels and a three-cylinder turbocharged petrol also used in the MINI hatchback – and all these impress with their economy. The 2 Series comes very close to the 1 Series’ economy figures, which is impressive given it's increased size and weight. Insurance groups broadly match those of its Mercedes B-Class rival, as does BMW’s warranty – though it lags behind some manufacturers in its generosity.

The most economical choice of engine is the 216d diesel, capable of returning up to 60.1mpg on the cheapest trim level. If you choose the smaller alloy wheels, this version emits from 124g/km of CO2. More powerful 2.0-litre 218d and 220d models are also offered, managing up to 56.5 and 54.3mpg respectively.

That means company-car users face Benefit-in-Kind (BiK) tax ratings that are about average due to the 4% surcharge on diesel, but the 216d is two bands lower than the 218d or 220d. 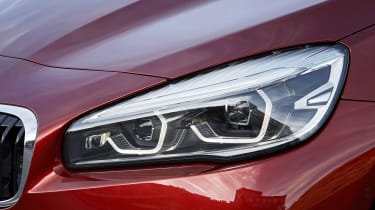 The most cost-effective petrol model to run is the 218i - the least powerful petrol option. It uses a three-cylinder turbocharged petrol that also powers the MINI hatchback and is capable of up to 44.8mpg. Economy drops only slightly to 44.1mpg, if you go for the seven-speed dual-clutch automatic gearbox. A more powerful 220i model is also available with a dual-clutch automatic, returning up to 42.8mpg and the same BiK rating as the manual 218i.

The absolute economy champion of the range is the 225xe plug-in hybrid model. This uses electric motors and batteries connected to the 1.5-litre turbo petrol engine and is said to return up to 166.2mpg. CO2 emissions of 39-41g/km mean that it is London Congestion Charge exempt and sits in the lowest BiK benefit banding.

Before you buy, check the car's exact CO2 emissions rating, because the size of the alloy wheels on some cars change the CO2 figure, as can the addition of BMW’s xDrive four-wheel-drive system.

Since they have the same engine range, the BMW 2 Series Active Tourer and its lengthened BMW 2 Series Gran Tourer sister fall into the same insurance groups – between groups 11 and 23. The Mercedes B-Class has similar insurance ratings when engines are compared size-for-size. We always recommend, though, that you contact your insurance provider before making a purchase decision.

BMW provides a three-year/unlimited-mileage warranty on all its cars. That’s the same as what you get on a Mercedes B-Class MPV, but lags behind some rivals. The rather less expensive Kia Carens, for example, came with a seven-year/100,000-mile warranty when you could buy it new.

Service intervals depend on the engine you choose, as the diesels usually require a check before the petrol ones do. BMW offers inclusive service plans, which cost from around £400 for a basic package. A more comprehensive plan will set you back more than £1,000, but may still be cost-effective for high-mileage motorists.