The BMW 2 Series Active Tourer was the brand's first-ever front-wheel-drive car until the new 1 Series and 2 Series models. Until its release, all BMWs have been either rear or four-wheel drive, making this model quite different to everything that's gone before it. That means instead of sharing parts with the rest of the BMW range, the 2 Series Active Tourer actually has more in common with the latest MINI.

Too few BMW 2 Series Active Tourer owners participated in our annual Driver Power owner satisfaction survey for it to have appeared in our results yet, but since it shares so much with other BMW products like the MINI hatchback and BMW X1 SUV, there are comparisons we can make.

The 2.0-litre diesel engine in the BMW 218d features in the MINI Cooper D, while the 1.5-litre three-cylinder petrol engine in the BMW 218i is available in the standard MINI Cooper. This should also help with the Active Tourer's running costs, which MINI owners are known to rate highly. However, the same isn’t necessarily true when it comes to reliability.

BMW as a brand came in 27th place overall in 2020 – however this was still one place ahead of rival Mercedes. Owners tell us that infotainment and economy are among the company’s strongest suits, but opinions of running costs and servicing prices at BMW dealerships are pretty lacklustre. Perhaps of most concern is that 20.4% of owners reported at least one fault during the first year of BMW ownership. 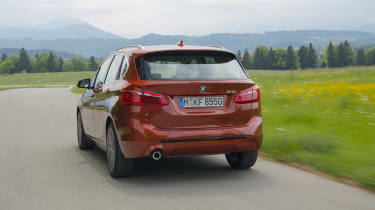 The BMW 2 Series Active Tourer was crash-tested by Euro NCAP in 2014 and achieved a five-star rating, scoring particularly highly for child occupant protection. The car features pedestrian warning and a city-braking function as standard. This automatically stops the car if you fail to respond to an obstacle ahead. Also included is Multi Collision Braking, where the car continues to apply the brakes in an accident until it comes to a complete stop. BMW's 'Alertness Assistant' monitors your driving style and notifies you if it thinks you should take a break.