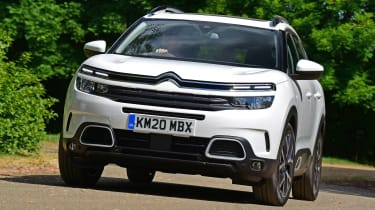 The Citroen C5 Aircross is born from the same mechanical platform as the Peugeot 3008, and the two models share engines and gearboxes. One big difference, however, is Citroen's much-vaunted 'Progressive Hydraulic Cushion' suspension. This takes the place of conventional bump stops that ordinarily limit suspension travel, replacing them with small hydraulic dampers.

Citroen claims that rather than experiencing a sudden shock when the suspension ‘bottoms out’ as it fully compresses, which can happen with conventional suspension, the C5’s system cushions these jolts, therefore improving the ride. However, on normal UK roads, with the litany of surface imperfections, a C5 Aircross fitted with large alloy wheels isn’t noticeably less prone to crashing uncomfortably through potholes and rough surfaces. While the car is mostly comfortable on smooth roads, it does struggle to insulate the interior from vibrations on rougher surfaces.

Given that the C5 Aircross is intended to be a comfortable car first and foremost, the ride quality of top versions is a significant disappointment. This lack of smoothness could be overlooked if the driving experience matched that of the best cars to drive in this class, but the car feels somewhat lethargic in corners and doesn’t really like to be driven quickly. The steering is too light and lacks feel, while the car’s high-riding suspension allows body roll in bends and turn-in feels vague and imprecise.

If you do drive the C5 Aircross with any vigour, passengers are likely to voice their complaints, as the seats lack much in the way of lateral support to hold them in place. The seating design is what Citroen calls ‘advanced comfort,’ which is more focused on making longer journeys more comfortable than offering support during enthusiastic cornering.

Like the Peugeot 3008, the C5 Aircross is front-wheel drive. It may be an SUV, but off-road ability is meagre unless you opt for the 18-inch Mud and Snow tyres. These combine with the optional Grip Control system to give the front wheels a bit more bite on loose or slippery surfaces, but a wet camping field is as far as we'd recommend venturing. 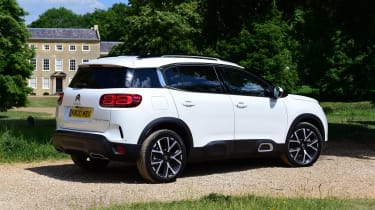 The choice of two petrol engines: the 128bhp 1.2-litre PureTech 130 and the 177bhp 1.6-litre Puretech 180 has now been reduced to just the 128bhp version in the UK. Both feature automatic stop/start, with the 130 being available with either a six-speed manual or an eight-speed automatic gearbox.

The 1.2-litre, three-cylinder turbo PureTech 130 we tried was whisper quiet, only becoming noticeable when you accelerate hard. Even when idling, you might have to glance at the rev counter to realise that the engine’s on and humming away. Despite its small size, an impressive amount of pulling power ensures the C5 Aircross can make relaxed progress. The eight-speed automatic gearbox is at its best when unhurried and left to its own devices, providing reasonably smooth gear changes.

The more powerful 180 version, which was only available with an automatic gearbox, is impressively quiet at lower speeds, with barely noticeable gear shifts. It’s pleasingly responsive when on the move, with only the occasional hint of engine noise making its way into the interior if you accelerate hard. The Puretech 180 can do 0-62mph in 8.2 seconds, and goes on to a top speed of 134mph.

The petrol and diesel have been joined by a petrol-based PHEV that uses a 1.6-litre turbocharged engine, an electric motor and battery pack. Alone, the petrol provides 178bhp but this is bolstered to 222bhp by electric power. All of that power is sent to the front wheels via an eight-speed automatic gearbox.

Acceleration from 0-62mph takes 8.7 seconds, which is competitive, if not neck-straining. The gearbox does a good job of shuffling through ratios most of the time but it can be caught out by sudden stabs of the throttle. Refinement is noteworthy, particularly in electric mode, where double-glazed glass and soundproofing help keep noise out of the interior. Even when the petrol engine does kick in, it's barely noticeable.

When paired with the eight-speed automatic gearbox, the BlueHDi 130 offers a smooth and mostly refined drive, with the familiar diesel grumble only noticeable at higher speeds. Around town, the shifts of the automatic gearbox are imperceptible when driving gently, but like the petrol version, it can be sluggish to react when you press the accelerator hard to kick down a gear. During our test on urban roads and motorways, we achieved around 45mpg.