In contrast to rivals like the Ford Fiesta, at no point was the new Citroen C3 designed to offer a sporty drive. Instead, comfort was the watchword and, according to the company, this didn’t just mean giving it a very soft suspension setup. No, the new Citroen C3 has benefitted from a system called Citroen Advanced Comfort. This includes making the car easy to use, easy to see out of, giving it heavily padded, comfortable seats and yes, still giving it pretty soft suspension. This copes well with bumps around town, but on faster roads of questionable quality things do still get somewhat bumpy when pressing on.

It’s not completely anodyne in corners, though. Granted, it’s not as sharp as rivals like the Fiesta or Ibiza, but it’s rewarding enough and more comfortable than any of those at the same time.

There are two to choose from – both with just the three cylinders and measuring 1.2 litres in capacity. The first – the 82bhp version – is naturally aspirated, while the 109bhp version is turbocharged. The former comes with a five-speed manual gearbox as standard, while a six-speed is offered on the latter. A six-speed automatic is an option for the most powerful engine.

Performance from the less powerful version is unlikely to set your heart racing, but it’s decent enough for the class, with 0-62mph being taken care of in 13.2 seconds in the 82bhp version. You'll need to rev it quite hard to get up to speed - on a motorway sliproad, for example. 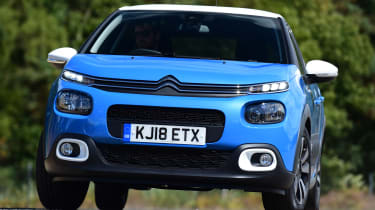 However, the 109bhp version is the sportiest in the range. The claimed 0-62mph time of 9.4 seconds is entirely believable and the engine feels pretty strong right the way across the rev-range. It tops out at 117mph, too, which is impressive for a car of this size.

While the headline economy and CO2 figures for the diesel may make it seem very tempting, it's only really worth it if you do loads of miles every year, as it costs significantly more to buy than the petrols.

That being said, if you do lots of motorway miles every year, the 99bhp engine is punchy enough to prevent the car from struggling at speed. This engine does 0-62mph in 10 seconds exactly, which is respectable and more than sufficient to keep up with traffic. It's the economy champion of the range, returning an impressive 67mpg.