Diesels are the most efficient, but petrol Citroen C3s cost much less to buy and are nearly as cheap to run

Despite the current trend for more and more manufacturers to go for hybrid or electric drive, Citroen has stuck to proven petrol and diesel engines for the C3. They’re all impressively efficient, however, and shouldn’t cost too much to run. Meanwhile, purchase prices are pretty low and Citroen dealers are renowned for generous discounts. This could, however, have a negative impact on the car’s residual values.

The 99bhp diesel engine in the Citroen C3 is the star of the economy show. Go for the 1.5-litre four-cylinder diesel engine and you should get some impressive figures, as Citroen claims up to 67mpg - the same as the Toyota Prius hybrid. It's a similar story with the diesel's CO2 output and BiK band, but it occupies a higher band than petrol versions due to the extra surcharge on diesel fuel. Diesel buyers have a smaller choice of trim levels - the engine can’t be chosen on the Origins trim level. 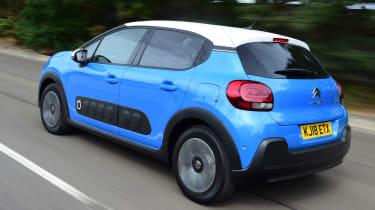 As frugal as the diesels are likely to be, the petrols are also pretty impressive. The least powerful petrol is the most efficient; the 81bhp version manages 51.3mpg and emits just 98g/km of CO2. This is also the best option for company-car buyers, with a low BiK rating thanks to the system favouring petrol engines over diesel. The other 1.2-litre PureTech engine with 109bhp returns 49.8mpg on average, and it's this engine that we recommend if you can afford it as the extra power makes it much easier to keep up with traffic.

The Citroen C3’s three-year/60,000-mile warranty is pretty standard for the class, matching the likes of the Ford Fiesta, Skoda Fabia, SEAT Ibiza and Volkswagen Polo, while the Honda Jazz has a 90,000-mile limit on its three-year cover.

It is, however, slightly behind some other rivals. For example, both the Toyota Yaris and the Hyundai i20 come with a five-year warranty, but the Toyota is limited to 100,000 miles, whereas the Hyundai has no mileage limit. Finally, the Kia Rio gets a very impressive seven-year/100,000-mile warranty.

The 82bhp PureTech model is cheapest to insure, in group 8, while the 109bhp petrol is in group 14. The diesels cost more to insure, with the BlueHDi in group 19, which is a similarly broad spread to rivals like the outgoing Peugeot 208.