As well as comfort and technology, the new Citroen C3 has impressive interior space and practicality

Citroen claims the C3 has class-leading interior space and while we can’t be absolutely certain if that’s true, it certainly feels pretty big inside. This is an impression that’s magnified by a large glass area letting plenty of light in.

Space in the rear seats is certainly enough for a couple of young children – made easier by the presence of the two ISOFIX points on the outer rear seats. Meanwhile, two adults can squeeze back there for short journeys without seriously inconveniencing themselves. You should be able to get three back there, too – although they’ll have to be good friends.

The fact that the C3 comes with five doors only makes it more practical, as well, meaning people don’t have to clamber in the back and making fitting child seats much easier. In terms of interior storage there’s enough to be getting on with, but the glovebox is definitely on the small side.

As practicality was such a concern for Citroen when it was building the C3. it had to come with a big boot. Measuring 300 litres, it’s bigger than what you get from the likes of the Ford Fiesta, Peugeot 208 and Vauxhall Corsa and exactly the same as the outgoing Renault Clio. It’s still a way behind the likes of the Skoda Fabia and Honda Jazz, although these have bigger boots than you might expect from a small car. 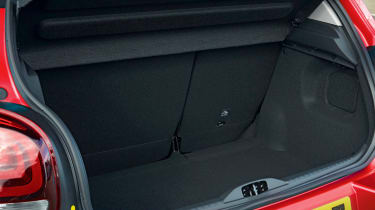 Drop the split-folding rear seats and this space leaps up to 922 litres – again, not bad for a supermini, but not among the class leaders in this regard, either. It’s a good shape, however, with a nice wide opening and there’s not too much of a boot lip to haul heavy items over.