The brand’s reliability record isn’t great, but the new Citroen C3 should be pretty safe

Citroen isn’t generally known for bulletproof reliability and our 2019 Driver Power owner satisfaction survey saw it come 24th out of 30 brands. The C3 had a similarly disappointing result, coming 81st out of the 100 cars in the survey. It shares engines with the Citroen C4 Cactus, which came bottom of the 100 cars overall in our 2019 Driver Power survey. Meanwhile, the Peugeot 208, which also uses the same engines as the C3, splits the two Citroens in 96th overall. 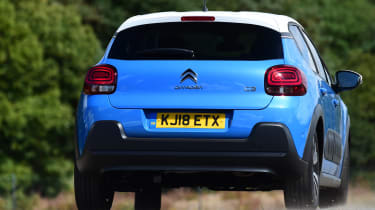 The C3 was awarded four out of five stars for safety by Euro NCAP. Crash testing revealed physical protection of occupants to be very good, but the car was marked down for its lack of autonomous emergency braking (although it is standard on Origins and Flair Plus trims). There’s plenty of standard safety kit, however, including mandatory items like tyre-pressure monitoring, stability control and a plethora of airbags front and back. You can also get equipment like blind-spot detection and a driver fatigue monitor that can sense how long you’ve been driving and suggest when you need to take a break.