If you pick any of the C4 SpaceTourer’s diesel engines, it should prove a cost-effective family car. The petrol engines don’t deliver such knockout economy figures, but private buyers who cover a low annual mileage may find that they work out cheaper in the long run.

The C4 SpaceTourer is about average in its class for insurance costs. It lags behind the best performers, though, when it comes to depreciation – the Volkswagen Touran in particular will hold onto a greater proportion of its purchase price when it comes time to sell.

If minimising fuel consumption is your utmost priority, the 99 and 118bhp BlueHDi diesel engines are the C4 SpaceTourer models for you. Both can return up to 74.3mpg (NEDC), while CO2 emissions of 100g/km means a middling Benefit-in-Kind company-car tax rating. Adding a six-speed automatic gearbox to the latter worsens fuel economy by 2mpg or so, but the BiK rating doesn’t change.

The BlueHDi 150 is a bigger, 2.0-litre engine, and fuel consumption is 65.7mpg on average in manual form, with 111g/km CO2 emissions for a higher BiK rating. An automatic gearbox brings economy down to 64.2mpg. It’s worth noting that bigger 17-inch wheels – standard on Feel and Flair models – increase fuel consumption and CO2 emissions marginally. 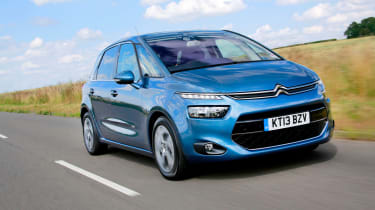 The 1.2-litre petrol engines don’t boast such impressive economy figures, but are far from disgraced. The entry-level PureTech 110 will return 55.4mpg, while the more powerful PureTech 130 improves that slightly to 56.5mpg. Both emit 115g/km of CO2, for a respectable BiK rating. Adding an automatic gearbox to the latter engine reduces economy to 55.4mpg, but has no effect on emissions.

We reckon the character and economy of the diesel engines suit the C4 SpaceTourer best, but buyers who expect to use the car for short town trips may find a petrol model stacks up well, given its lower purchase price. All Citroen C4 SpaceTourer models will cost £150 per year to tax.

Most Citroen C4 SpaceTourer models range between insurance groups 16 and 23, but the most powerful diesel is in group 25. By comparison, the Mazda CX-5 runs from group 17 to 23.

The Citroen C4 SpaceTourer comes with a three-year/60,000-mile warranty, which matches the duration of those offered by Ford and Mazda.

Citroen running costs have always been competitive, and the C4 SpaceTourer is likely to cost a little less for routine maintenance than several rivals. Citroen can also provide a service plan to help spread the cost of routine workshop visits.