With a big car such as the Grand C4 SpaceTourer, you may be worried that it could be difficult to drive, but Citroen has countered the problem by offering big windows, a wraparound panoramic windscreen and front quarter-light windows that reduce the blind spot created by the windscreen pillars. Only the basic model does without a rear parking aid.

While Ford sought to make the Ford S-MAX the most rewarding model to drive in its class, Citroen focused on comfort when it designed the Grand C4 SpaceTourer. The car’s suspension is supple – shrugging of big bumps with ease, although smaller lumps and broken road surfaces aren’t dealt with quite as well.

Take on some challenging corners and it becomes clear that the C4’s comfortable suspension setup has come at the expense of sharp handling – there’s a significant amount of body lean. But if you drive the car within its limits, it feels safe and offers plenty of grip. The steering also takes away from overall driver enjoyment – it’s very light, so it can be hard to judge when the car is reaching its limits in a bend – although it does make the Citroen much easier to drive in town. 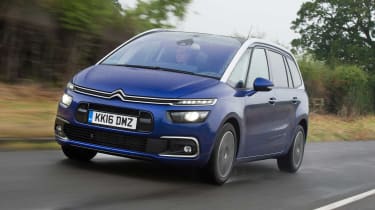 The entry-level 1.6-litre diesel engine with 99bhp is no longer available, but it's best to avoid it if you're looking at the used-car market. We recommend upgrading to the 128bhp version of the newer 1.5-litre BlueHDi engine, which is barely any less economical. It gets the C4 from 0-62mph in 10.9 seconds and feels quick enough even when the car is fully loaded. Both engines are impressively quiet, but the more powerful option feels far less strained on motorways. 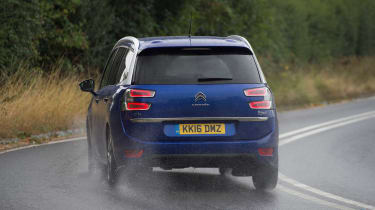 On paper, the extra power of the 158bhp diesel looks appealing, as it takes the big Citroen from 0-62mph in 9.2 seconds. However, the way its power is delivered feels rather sudden and you have to make frequent gearchanges to make the most of the extra muscle. This means it can actually be more fatiguing to drive than the slower, less powerful versions.

Unlike the smaller C4 SpaceTourer, there's only one version of the 1.2-litre turbocharged three-cylinder petrol engine available in the Grand version. It produces 128bhp, and regardless of whether you pick the six-speed manual or eight-speed automatic gearbox, this engine manages 0-62mph in 10 seconds. On the move, it's a little quieter and smoother than the diesels, and more relaxing to drive around town.