The Citroen Grand C4 SpaceTourero comes with seven seats (the standard C4 SpaceTourer only has five) and has lots of storage areas hidden around the interior. Fold away the third row of seats and you get a boot that’s bigger than that of the Volkswagen Golf, while folding all the seats away creates a van-like load bay. 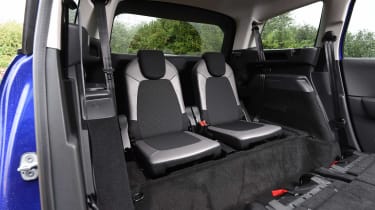 The Citroen Grand C4 SpaceTourer has a small glovebox (a result of the car's conversion from left to right-hand drive meaning a fusebox eats into the available space), but there two large lidded storage areas on top of the dashboard and a smaller one in the centre console.

In the middle row of seats, the MPV offers three individual chairs and a flat floor, so there’s plenty of space for the middle passenger’s feet and there should be more than enough headroom for everyone. Legroom is also very impressive thanks to the extra distance between front and rear wheels. 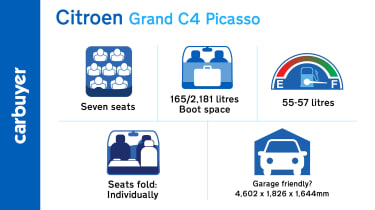 All the back seats recline for extra comfort, and on all but the entry-level Touch Plus model, they also slide forwards and backwards so you can vary legroom and boot space to suit your needs. The Grand C4 SpaceTourer has ISOFIX child-seat mounts on all the second-row seats, which is particularly useful if you have three young children.

While the Grand C4 SpaceTourer still has door pillars and lacks the sliding rear doors of the Volkswagen Sharan, the outer seats in the second row fold away to give decent access to the third row. That’s good news for kids, but adults will still have to squeeze in and won’t enjoy a long journey back there. Nevertheless, the seats in the boot can be folded out with one hand thanks to mechanism that’s simple to operate. 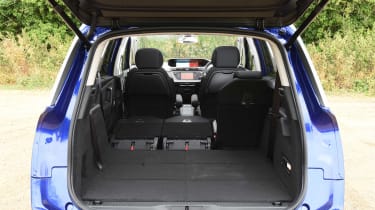 With all seats up, the Citroen Grand C4 SpaceTourer has a 165-litre boot. While this is by no means a vast amount of space, it’s reasonable for a car carrying seven people. Drop the rear seats and the load area grows to an impressive 632 litres, which can be increased to 793 litres by sliding the second row of seats forwards. Folding all the rear seats gives you a van-like carrying capacity of 2,181 litres. All C4 Grand SpaceTourers feature a flat boot floor and no load lip, so sliding heavy items in the back is very easy.