The Dacia Sandero Stepway can be a relaxing way to travel, as long as you aren’t in too much of a hurry

The Dacia Sandero Stepway has raised suspension meaning there’s lots of body lean when driving through corners, but the upshot is a very smooth ride that puts some more expensive cars to shame. The car makes a great cruiser when you're not pushing too hard and rewards you for taking things easy. That's not to say that life behind the wheel of the Sandero Stepway is boring, though.

Enthusiastic drivers may find the delayed response of the steering a little disconcerting, but the Stepway grips the road fairly well and can carry surprising speed through corners. And while the 0.9-litre petrol engine doesn't provide much urgency, it does have loads of charisma.

There is more than its fair share of wind and road noise when travelling at high speeds and those who drive mainly in town may find low-speed manoeuvring heavy and tiresome when parking. A six-speed manual gearbox would be appreciated, but Dacia doesn't offer one across the range - a five-speed is fitted to reduce costs. 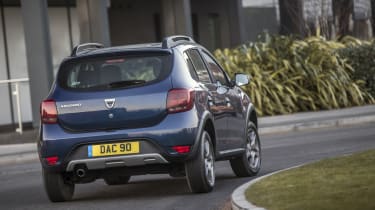 You should also be aware that although the car sports raised suspension and tough-looking bodywork extensions, the Stepway isn't an off-roader. Try to take it onto the rough stuff and you’ll get stuck sooner rather than later, so make sure you have your mobile phone with you.

There are three petrol engine options available in the Sandero Stepway. The 0.9-litre non-turbocharged SCe 75 produces 74bhp, while a more powerful turbocharged version badged as the TCe 90 produces 89bhp. While the latter needs to be revved hard and tends to struggle to regain cruising speed if you have to ease off the accelerator, it’s the best of the two. Its 0-62mph-time of 11.1 seconds is considerably quicker than the 16.1 seconds managed by the SCe 75 and, given that official fuel economy is identical, it makes sense to go for the more powerful of these two engines unless you really need the car to be as cheap as possible.

The petrol/LPG TCe 100 Bi-Fuel was added to the range in early 2020. It uses a 1.0-litre engine capable of running on petrol or on LPG. While it’s the most powerful powertrain available in the Sandero Stepway line-up, its performance places it firmly in the middle of the range, with 0-62mph in 11.6 seconds and a top speed of 109mph.