Up until recently, there was only one engine choice for the Dacia Sandero Stepway: a 0.9-litre 89bhp turbocharged petrol. It will place a relatively light burden on your wallet and should be a reasonable ownership prospect too; it loses roughly the same amount of its value over a three-year period as its major rivals.

The TCe 90 Sandero Stepway's three-cylinder 0.9-litre petrol engine is a decent performer, returning up to 44.8mpg and CO2 emissions of 141g/km, which places it in a middling Benefit-in-Kind (BiK) tax band for business drivers. This is joined by an entry-level SCe 75 petrol engine, which is only available in Essential trim. It's a non-turbocharged version of the 0.9-litre engine, and goes without an Eco driving mode and stop-start technology. It’s slightly more efficient than the turbocharged engine, and is capable of up to 46.3mpg with emissions of 137g/km.

The Sandero Stepway is no longer available with a diesel engine after the Blue dCi model was discontinued in 2020.

Given that the Sandero Stepway is so inexpensive to start with, it isn’t perhaps as cheap to insure as you might expect. The Essential model sits in group eight, while Comfort and SE Twenty trims are classified in group nine. 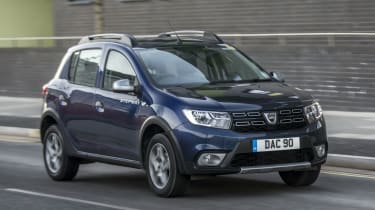 Dacia also offers a variety of service plans starting at £150 for one year or one service. There are also plans for two, three and four services with the four year/four service plan costing £750. These plans could reduce maintenance costs significantly in the long run if you plan to keep the car for that long.