Raised suspension makes the Dacia Sandero Stepway slightly more practical than the standard car, because it’s easier to get people and bags into and out of it

The Dacia Sandero Stepway has much to recommend if you're looking for a small-ish, practical car. The boot is a decent size and there's plenty of interior space, making the Stepway a useful round-town holdall.

There’s a seriously decent amount of front-seat space available, certainly compared with what rivals can offer. It isn’t too much of a squeeze in the back, either, with plenty of space for three adults to fit in, shoulder-to-shoulder. There’s also the facility to fit two child seats using the standard ISOFIX mountings, but there’s no space for a third seat. 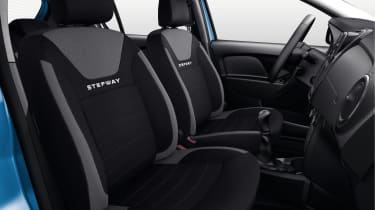 Getting people and/or child seats into the Sandero Stepway is pretty easy, because the door openings are fairly big and the doors open out quite a long way. Interior storage is perfectly acceptable, with the odd nook and cranny for change and mobile phones, and there are some pretty sizeable door bins as well.

Comparatively speaking, the Sandero Stepway has a glass area equivalent to that of your average office block, so seeing out of it is no problem whatsoever.

Behind the rear seats is a 320-litre boot that can be expanded to 1,200 litres by folding the 60:40 splitting rear seats down flat. That's a good 50 litres more than most other traditional superminis such as the Renault Clio, so the Sandero Stepway is a seriously practical option. 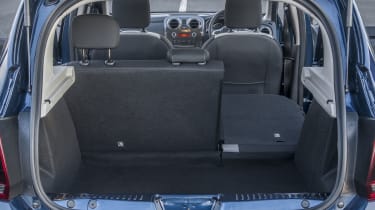 The Sandero Stepway has a very small maximum towing capacity of just 790kg when towing a braked trailer - even with the diesel engine. That means you won’t be able to tow even a medium-sized caravan. It would be best to stick to a small trailer for garden rubbish, or perhaps a couple of motorcycles.