For the authentic muscle-car experience, the Ford Mustang V8 is the one to go for

Muscle cars – and the Ford Mustang especially – have a reputation for somewhat wayward handling, with soft, unsophisticated suspension (especially at the rear) leading to excessive body lean in corners and a rather bouncy ride. This latest version, however, has been extensively re-engineered for European tastes – and it shows.

It has a more sophisticated independent rear suspension setup for the first time, while all UK models get the Performance Pack, which stiffens the springs and adds bigger, more powerful brakes. These changes are certainly transformative. The suspension does a good job of keeping body lean in check and the brakes are plenty powerful enough, although you may find them fading fairly quickly if you use the car on track. 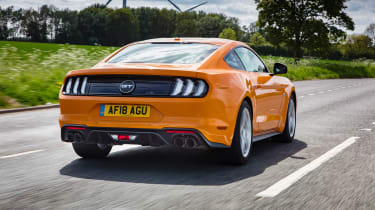 Those stiffer springs do have an effect on ride quality, however – at low speeds, the Mustang GT is just plain uncomfortable. At speed everything settles down, but it’s still pretty firm. It generates impressive grip and the steering is both accurate and full of feel.

The suspension has continued to evolve, with the latest version featuring uprated parts to further improve composure on really challenging roads. For the best blend of handling and comfort, owners can also choose optional MagneRide adaptive suspension, that helps smooth out bumps quickly and keeps the Mustang feeling very planted.

Ford’s latest 10-speed automatic gearbox might sound like overkill, but it’s engineered to shift gears faster and more smoothly than the outgoing six-speed. This, and its greater spread of ratios, provides a performance boost and should also make the car more fuel-efficient and relaxed on the motorway. Rather than go through each gear, it can also ‘skip’ speeds, changing from third up to sixth or from 10th down to fourth, for example. It’s impressively smooth, but we still recommend the manual and the automatic feels lazier than the best rivals.

For an even more sporty ride or on-track performance, you can purchase bolt-on performance accessories from the Ford Performance Parts range - including suspension that lowers the car by up to 40mm and has 16 stages of stiffness adjustment. 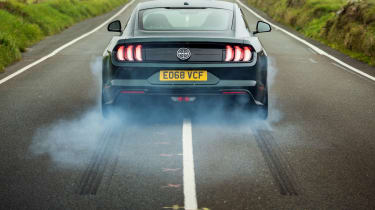 There are only two engines to choose from and both have their plus points. The entry-level 2.3-litre turbocharged four-cylinder petrol produces 286bhp. The pre-facelift car managed 0-62mph in 5.8 seconds and on to a top speed of 145mph. The 2018 version is cleaner and has slightly less power, extending this to 6.4 seconds.

It’s a good engine, although the way it delivers its power can be a bit spiky – it all comes in one big lump near the top of the rev range, rather than being spread across it evenly. The turbocharged engine was shared with the Ford Focus RS but delivers less power than it did in the Focus. A sound generator helps give the car more of a soundtrack, although there's no denying the noise, which is pumped through the stereo speakers, is a little artificial. Still, the engine is smooth and responds keenly to the throttle. It feels quick too, and in many situations it will keep pace with the pricier and thirstier V8.

Adding to the appeal is the precise, short throw and mechanical action of the six-speed manual gearbox. Both the engine sound and gearshift feel can be made better with an optional Borla exhaust and short-shift kit from Ford’s Performance catalogue. 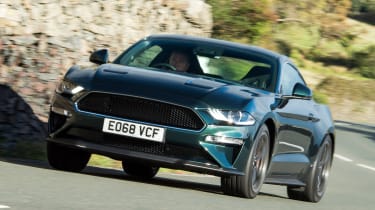 In our opinion, however, the 5.0-litre V8 is the engine to go for. It's faster than the EcoBoost – 0-62mph is dispatched in around four seconds – but almost more importantly, it sounds much more dramatic and visceral. There’s a menacing burble at low revs that transforms into a guttural, angry roar as you accelerate. The Active Valve Performance Exhaust makes it sound even better. First featured in the Ford Mustang Bullitt special edition, the manual V8 also now gets rev-matching technology that automatically and precisely blips the throttle as you downshift to match the new gear. Speaking of the Bullitt, it emits an even more guttural growl, making it one of the best-sounding cars on sale. Modifications over the standard car include a massive cone filter air intake, new throttle bodies and that special exhaust, lifting power to 453bhp.

Yes, the V8 will cost more to run, but it’s faster, much more characterful and the 444bhp it produces is spread far more evenly across the rev range. It’s worth every penny of the premium you pay over the EcoBoost engine. It also fits the nature of the car better. Muscle cars and big V8s just go together, and this is pretty much the only V8 you’re going to get for less than £50,000.

If it’s not fast enough, you can always fit the Ford-approved Roush supercharger, boosting power to around 600bhp without destroying the car’s manufacturer warranty.