Looking at the initial purchase prices, the Mustang looks like fantastic value for money – and it can be – but running costs are fairly steep, too. The most powerful V8 version drinks fuel at an alarming rate, and is more than likely to chew through tyres if driven briskly. It’s not a likely candidate for company-car drivers, then, and most owners will probably own a more economical car as well – savouring the Mustang when the mood takes them.

The most efficient and cheapest-to-run version of the Mustang is the entry-level 2.3 EcoBoost with a six-speed manual gearbox. It’s still not great, however, with official tests promising average fuel economy of 31.7mpg. Choose an automatic gearbox and this drops to just 30.7mpg. Those figures equate to CO2 emissions of around 200g/km, but as long as your Mustang costs under £40,000 (including options), tax costs just £150 a year. Every Mustang sits in the top 37% Benefit-in-Kind bracket for company-car drivers. 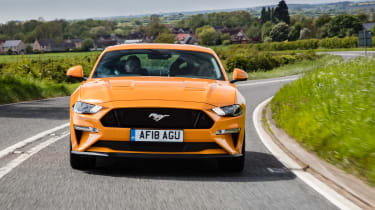 There’s only one other engine option – a 5.0-litre V8 petrol. Unsurprisingly, this fares even worse in terms of fuel economy and CO2 emissions than the EcoBoost. Unlike the four-cylinder, going for an automatic gearbox in this case actually results in a (slightly) more efficient car. You’ll see 25.2mpg rather than the 23.9mpg quoted for the manual, while CO2 emissions top 270g/km. Because the V8 costs over £40,000, you’ll also pay a £325 surcharge on the Mustang’s £150 tax bill in years two to six, totalling £475. Still, this is still less than under the old road tax system.

Mustang insurance costs should be around the same as for the similarly powered BMW M4, which sits in group 42. The Mustang V8 is in group 43, so it’s likely to be slightly more expensive to cover. The 2.3-litre four-cylinder version will be a little cheaper, sitting as it does in group 41, but this is somewhat higher than the equivalent BMW 440i, which is in group 37.

Like all Fords, the Mustang comes with a three-year/60,000-mile warranty, which, while not the most generous available, is about par-for-the-course on a car such as this. BMW and Mercedes’ three-year warranties have no mileage limit, while Audi’s, like Ford’s, is limited to three years and 60,000 miles.