The Ford Mustang has a good-sized boot, but it's not a very practical car overall

Coupes don't tend to be very practical, and the Mustang is no different. While its boot is a reasonably useful size, the car only has three doors and its back seats aren't really comfortable for adults.

The Mustang is a large car – longer than the Audi A5 and BMW 4 Series coupes – but while there's plenty of space for occupants up front, the rear seats are very tight for adults. Only children will be comfortable back there for any length of time.

Getting into the rear seats is difficult in the first place, because there are no back doors, and the sloping coupe roofline eats into headroom, too. There are two big cup-holders in the centre console, but other than those, there isn't much in the way of storage space.

Although the steering wheel has been moved from the left hand side to the right for UK buyers, the centre console is carried across the Atlantic unchanged. That means there's nowhere to put your left elbow - other than in one of the cup-holders. The handbrake handle is on the far side of the centre console so is quite a reach. 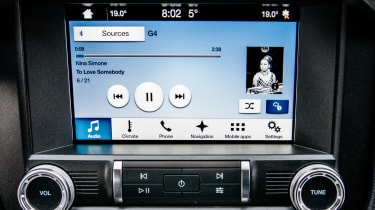 Mustang boot space stands at 408 litres, which is noticeably less than the 445 litres you get in the BMW 4 Series. However, Ford is keen to emphasise that the Mustang's boot can hold two golf bags - and it probably will, once you've negotiated the fairly small boot opening. The boot lip is both high and quite narrow due to the way the rear lights are mounted.

Space is reduced further if you choose the optional £800 Shaker audio upgrade. It's certainly loud, but as the speaker is mounted in the boot, you'll lose some of that golf club carrying ability.

Getting into the boot may leave you with your hands dirty too. The boot release button is mounted out of sight just above the rear numberplate, an area certain to get covered in road grime. At least you can open the boot with a button on the key.