The Mustang's simple engineering should be reliable, while safety technology has been improved

It’s still a bit early for any concrete reliability data to have emerged about this Mustang, but early indications are encouraging. The car has always had a good record for reliability in the US. Enthusiasts have high expectations, and it has been the world’s best-selling sports coupe for the past three years. This means we’d expect the latest Mustang to be pretty durable.

In our 2020 Driver Power customer satisfaction survey, Ford was 23rd overall out of 30 manufacturers, ahead of Audi and Mercedes. A reasonable 15.6% of owners reported one or more faults with their car within the first year of ownership.

The Mustang was given a disappointing two-star overall rating out of a possible five by independent crash safety experts Euro NCAP. It scored middling 72% for its adult occupant protection and a disappointing 32% for the way children are looked after in an accident.

Its overall rating was also tempered by a very low 16% score for its safety assistance systems. Following improvements by Ford, the Mustang was tested again in 2017 and scored three stars, with 61% in the safety assistance category. 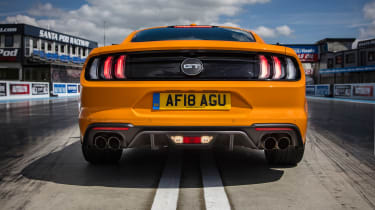 Autonomous emergency braking with pedestrian detection as standard, along with a system to help keep you from drifting out of a lane. The design of the front airbags was also improved.

The facelifted 2018 car is offered with adaptive cruise control, safe distance warnings, lane-departure warning and a system designed to help you stay in lane, all for the first time in the Mustang. Ford is hoping these additions will lead to an improved Euro NCAP rating.