The Ford Ranger is one of the best pick-ups to drive, but it’s no replacement for a conventional SUV

The Ford Ranger drives and steers well; in fact, it's one of the best vehicles of its type to drive. Of course, like any pick-up, the Ranger has been built with hauling loads in mind, so it'll always be a compromise on the road.

In practice, this means the simple, stiff rear suspension has been designed to support more than a tonne in the load bed, or tow a trailer weighing up to 3,500kg. That leads to the Ranger bouncing rather than gliding over bumps when there's no weight in the back.

Although you have to make allowances for the extra bulk that a car like this carries, the Ford Ranger feels more car-like than most pick-ups, with more direct steering than a Nissan Navara. This means it’s more agile and fun to drive along a country lane, as well as easier to live with in town, although it does pitch and lean in corners, with a slightly unsettled feel that discourages drivers from being too enthusiastic – caused partially by the hard rear springs that allow huge payloads to be carried.

The Ranger can’t quite match the Volkswagen Amarok’s (relative) precision, speed and motorway manners, but it's quieter at high speeds than its more premium rival. Four-wheel-drive versions are highly capable off-road, with technology to make driving down steep slopes safer. Impressively, most four-wheel-drive models allow you to switch between two and four-wheel drive by turning a dial on the centre console. There’s a low-range option for extra off-road prowess, which we found impressive when we asked the Ranger to scramble across loose rocks, and which you’ll need if you intend to make use of the 800mm wading depth (600mm on the two-wheel-drive version). There’s also an optional off-road pack that adds a locking rear differential (for improved grip) and additional underbody protection.

So extensive are the modifications to its suspension, the Ranger Raptor is arguably a model in its own right. Raised ride height, all new coil suspension at the rear (the standard car gets antique style leaf springs) and expensive dampers transform the Ranger’s character. Not only does it ride better and handle with more precision, it can tackle rough off-road tracks at the sort of speed that would cause severe damage to the standard car, and many of its rivals.

Two diesel options are available: a turbocharged four-cylinder 2.0-litre diesel engine is available with 168bhp and 210bhp guises. Most buyers will choose the former, as it offers more than enough power for most people’s needs and makes financial sense on paper. The smaller unit offers far more refinement on the move when compared to the old 3.2-litre diesel engine, which was discontinued in early 2020. 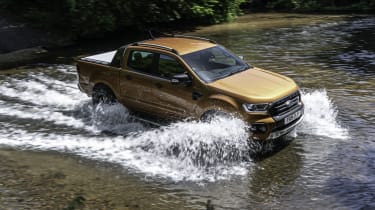 Both versions of the 2.0-litre Ranger are pretty adept at towing, with between 420 and 500Nm of torque on tap. Whatever the engine the Ranger feels quite potent, although it's not as fast as its lighter 2.4-litre Mitsubishi L200 rival, while the V6 engines in the Volkswagen Amarok are also more refined.

Although its towing limit isn’t any higher than the 3,500kg limit of the 168bhp 2.0-litre, the more powerful 210bhp version gives a greater feeling of confidence, thanks largely to a higher torque output.