If you need to carry heavy loads or tow a large trailer, the Ford Ranger is ideal

The Ford Ranger's dimensions mean it's a big and occasionally unwieldy vehicle compared to family SUVs. You can blame the long load bed for that. But square corners and big door mirrors mean it's relatively easy to judge the car's extremities.

If you'll regularly need to squeeze your Ranger into small gaps, go for the Limited model with rear parking sensors, or the Wildtrak, which has a rear parking camera.

Regular, Super and Double cabs are available. The Regular Cab is for the XL only and has two seats and a large load bed, while the Super Cab (XLT and Limited) has small rear-hinged doors giving access to two fairly small ‘occasional’ rear seats best suited to children. However, when the front and rear side doors are opened together, there’s no pillar between them, making access easier than in the Regular Cab.

The Double Cab is available in all trim levels and has four full-sized doors and three proper rear seats, although they still aren’t as spacious as you’ll be used to in an SUV such as the Nissan X-Trail.

There are plenty of storage spaces around the interior, including deep door pockets big enough for 1.5-litre water bottles and a glovebox each for the driver and front-seat passenger. 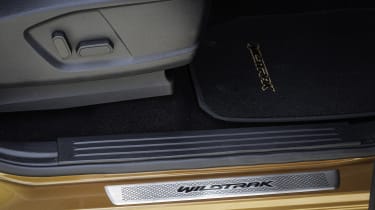 There's a large cubbyhole in the centre console that can store six drinks cans – and even keep them cool thanks to a vent fed by the air-con system on higher-spec models. And depending on bodystyle, there's even some storage space under the rear seats.

Depending on your requirements, you'll need to compromise on either passenger space or load capacity. The Regular Cab only has two doors and two seats, but this leaves you with a massive 2.3-metre-long load bed with a gross maximum capacity of 1,307kg (depending on the engine). The larger, four-door, five-seat Double Cab obviously has more space for passengers, but reduces load-bed length to 1.5 metres and payload to a maximum of 1,217kg in XL trim. 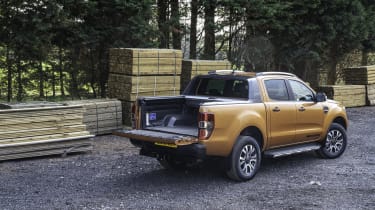 The Ranger's tailgate folds flat, but it sits a lofty 835mm off the ground on four-wheel-drive models, which can make loading heavy items difficult without the use of suitable ramps or even a forklift.

The Ranger is an excellent tow car, with all models capable of pulling a 3,500kg braked trailer. Regardless of model, the unbraked towing limit is 750kg.