The Honda Civic Type R has one of the most enviable followings of any hot hatch. Ever since the first examples reached UK showrooms almost two decades ago, drivers loved them for their responsive controls, high-revving engines and no-nonsense nature. Perhaps the most important thing, though, is the way the Type-R handles.

The truth is – the Type R has changed, but fans of previous models really shouldn’t panic. It’s gone from being hard-edged all the time to offering you a choice between thrill seeking and chilling out. It can still do everything that we have come to expect from the badge, but is now far easier to live with on a daily basis. This is especially true for the new Sportline version, which has smaller 19-inch alloy wheels and Michelin Pilot Sport 4S tyres with softer sidewalls to improve comfort.

Unlike some hot hatches, the Civic Type R is defiantly front-wheel drive and relies on a seriously well designed chassis to provide traction and grip, without the extra weight of a complicated four-wheel drive system. Put simply, the Type R is sensational in corners – the steering is as sharp and responsive as you’d want, and a clever front differential means that full power can be applied even when steering very hard. There’s loads of grip, so high cornering speeds are free of drama, while the big brakes feel extremely effective. They've been changed for a 'floating' disc design for 2020 that saves 2.5kg of weight and should stave off brake fade for longer too. 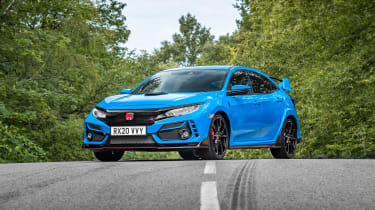 What’s more, a far smoother ride addresses a key bugbear of the previous car. Even on huge 20-inch alloy wheels, the Type R no longer punishes you with a firm, jiggly ride. Ironically, part of the reason is that the latest model's structure is 37% stiffer than before – but rather than meaning a hard ride, this actually means that the suspension doesn’t have to work so hard to keep the car’s body under control. That means the springs and dampers can better concentrate on smoothing out bumps.

The latest Type-R uses a far more sophisticated rear suspension design than the previous model, and adaptive damping is on hand, too. For the first time, there’s a Comfort mode for smooth, effortless cruising, but flicking the switch to Sport or R+ mode stiffens the dampers, as well as adjusting the accelerator and engine output for a sharper response. The dampers’ settings have been fettled for 2020, and there's a new sound actuator that enhances engine sound in Sport and +R modes, while making it quieter in Comfort. Both sets of changes work well, improving the Type-R slightly without any negative consequences.

The last generation Type R marked a departure from the old way of doing things, employing a turbocharger for the first time. This served to boost power at higher engine revs while Honda’s famous VTEC variable valve timing was re-purposed to improve response at lower speeds. And since it worked so well, the same engine has been carried over to the latest model.

This isn’t a sign of complacency on the part of Honda, though – another 10bhp has been coaxed out of the 2.0-litre petrol engine, bringing the total to 316. This means it has every bit as much verve as it did in the old car, but feels more responsive when you toe the accelerator. It feels at its liveliest above 2,500 rpm, and Hondas claim of a 5.8-second 0-62mph acceleration time seems rather conservative – we reckon it feels a good deal quicker than that. 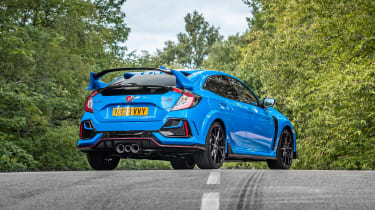 While still not quite as distinctive to listen to as some rivals, it’s gained a slightly more charismatic exhaust note than the previous model, and can emit a few evocative crackles and pops when you lift off the accelerator pedal. Yet it’s still less boomy and annoying when cruising than used to be the case.

The six-speed gearbox is just as impressive, with a very short amount of travel between gears and a slick yet weighty feel. It’s an extremely satisfying gearchange, and matches the precise nature of the car. For the first time, the Type-R also features an automatic rev-matching system to make changing gear smoother, and lessen the annoying jerk that can cause discomfort during each shift. It works very well, but you can deactivate it via a sub-menu if you find that it dilutes your experience. A new gear knob, introduced for the facelift, is arguably the best fitted to any production car, with a counterweight to improve shift accuracy.

For 2020, Honda has introduced two new versions; a hardcore Limited Edition model that goes without an infotainment screen and sound deadening, and a Sport Line version that’s more softly sprung and should be even easier to live with on a daily basis.