The previous Civic Type R inherited a clever party piece from its less spectacular stablemates – a pair of flip-up ‘magic’ rear seats that allowed an extra storage area. These are absent in the latest model, though – the fuel tank has been moved forwards so this feature is no longer possible. Enthusiasts will be pleased to take note that this is good news for weight distribution. 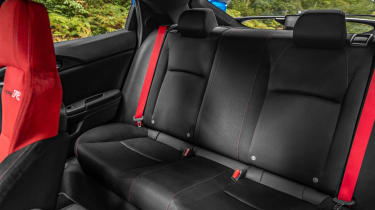 The latest Honda Civic is a spacious, versatile car and the Type R follows the same pattern. There’s plenty of passenger space front and rear – legroom is plentiful in the back although anybody over six feet tall might run a little short on headroom. The interior is also generously supplied with storage cubbies, as well as neat touches like clips to prevent smartphone cables causing an unsightly tangle. 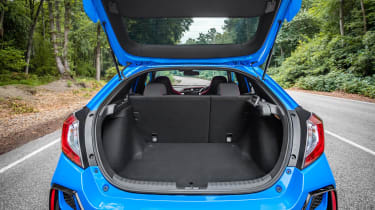 Despite its obvious prowess on a race track, the Civic Type R will serve for many as the sole car of a family and a big boot means that this is one hot hatch that’s well suited to daily life. There’s 420 litres of luggage capacity, and the rear seatbacks will fold down, too, unlocking a total capacity of 1,580 litres.

The rear wheelarches do intrude into the boot, though, which means it’s a slightly awkward shape. However, though carrying bulky and rectangular items may be tricky, there’s a huge amount of space for multiple soft bags. What’s more, the parcel shelf takes the form of an extending tonneau cover like that of an estate car. It means that larger items can be carried without having to either carry a solid parcel shelf inside the car, or leaving it at home.