The latest Honda Civic is expected to follow in the footsteps of its predecessor, with a solid reputation for reliability and safety. As a manufacturer, reliability is one of Honda’s strongest suits, although outright customer satisfaction has sometimes proven variable.

The Civic Type R engine is mechanically very similar to that used in the previous car – with such a lot of power it’s relatively unstressed in normal driving and has generally proven reliable. Other technology, including the infotainment system, are shared with the rest of the Honda Civic range.

The latest Civic finished 39th out of the top 75 cars in our 2020 Driver Power owner satisfaction survey. That’s a respectable score but did include praise for low running costs, which might not apply to the Type R. A slightly worrying 18.4% of owners reported a fault in the first year of ownership, with electrical gremlins most often the problem. 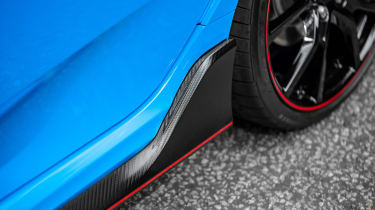 When it comes to safety, the Civic doesn’t appear to be taking any chances. All models are fitted with autonomous emergency braking, a technology known to reduce the risk of rear-end collisions. This technology helped the Civic range to a five-star Euro NCAP safety rating.

There’s also adaptive cruise control, lane-departure warning and traffic-sign recognition, all of which aim to make life easier for the driver – especially the provision to link the road-sign recognition feature to the active cruise control, automatically adjusting speed when changing speed limits are detected. If you spend extra and choose the GT version, you also get blind-spot monitoring which incorporates a system to warn you of traffic crossing from the sides.