The Kona follows a familiar formula in this part of the market, delivering average performance and safe handling that isn’t intended to engage or entertain the driver. The result is a competent car – it doesn't lean noticeably in corners and the steering has a decent sense of weight to it, but the Kona neither handles like a Mazda CX-3 or soothes like a Citroen C3 Aircross.

The 1.0-litre petrol comes with a six-speed manual gearbox, which can feel a little clunky, and the car understeers in a predictable manner when pushed hard in corners, While the Kona displays decent body control, the trade-off is a firm ride, while heavy yet vague-feeling steering doesn’t enhance the overall driving experience. We found that the SE, with its smaller 17-inch wheels, offers a far smoother ride than the costlier Premium, without missing out noticeably on handling prowess.

Better news is that the Kona is fairly quiet at motorway speeds, which is good, because cruising and pootling around town are really what it was designed for; as long as you don’t expect more, you shouldn’t be too disappointed. 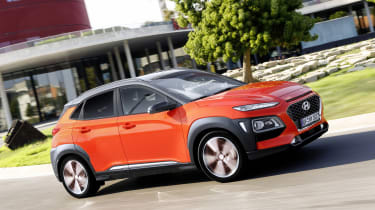 The Hyundai Kona is only available with two petrol engines and the majority of buyers will go for the more economical 1.0-litre three-cylinder. It produces 118bhp and gets the Kona from 0-62mph in 12 seconds, although it actually proved rather faster than that in our tests.

It has enough power for everyday situations, particularly around town, and is a pleasant engine to use. It doesn't get terribly loud, either, but isn't quite as powerful as the 1.2-litre petrol engine in the Citroen C3 Aircross, and although it matches the Mazda CX-3 for performance, it doesn't feel as eager.

The 175bhp 1.6-litre petrol model has a faster 0-62mph time of 7.9 seconds, making it significantly faster than the 1.0-litre Kona on paper. The option of four-wheel drive sees the Kona steal a march on most rivals, too – although the SsangYong Tivoli and Suzuki Vitara are also worth looking at if you need all-weather grip from your small SUV.

As of mid-2019, Hyundai no longer offers the Kona with a diesel engine.

If you crave the efficiency of a diesel, the Kona Hybrid could be the ideal candidate. It pairs a 1.6-litre petrol engine with a 43bhp electric motor and a 1.56kWh battery pack, allowing for zero emissions driving at low speeds. This gives the Hybrid a fuel efficiency figure of 56.5mpg which we've reviewed separately.

The Hyundai Kona Electric is a pure electric SUV introduced at the beginning of the year. Driving carefully, 300 miles can be achieved from a full charge of the biggest 64kWh battery. There is a cheaper 39kWh battery offered, but you do get slightly less miles from this option with a 200-mile range.