As with any electric car, buying an I-Pace is certainly going to save you money on everyday running costs. Charging the battery will be far cheaper than putting petrol or diesel in a conventional SUV. There are big savings to be made on company-car tax and the London Congestion Charge, too. However, the I-Pace still comes with some of the traditional expense of owning a Jaguar – insurance will be expensive and consumables such as tyres will cost more than average, too.

The I-Pace is an expensive car to buy but a cheap one to run; electricity is much cheaper than petrol or diesel and fewer moving parts compared to a conventional car means there’s less to service and replace. Zero CO2 exhaust emissions mean the I-Pace is in the lowest, 0% Benefit-in-Kind bracket for company-car tax from April 2020, making it an attractive proposition for business customers. If you regularly drive the car in central London, you won’t have to pay the Congestion Charge either. More towns and cities are introducing emissions-based restrictions and charges over the coming years, so the I-Pace could well prove useful in this regard elsewhere in future. The only sting in the tail is the high cost of insurance.

The I-Pace has a 90kWh battery that gives the car a claimed range of up to 292 miles. This is almost on a par with the Tesla Model X Performance, which is capable of 301 miles but is down on the Long Range version of the Tesla, which has a range of up to 314 miles. In real-world testing, we've found a range of roughly 220 miles is more realistic, which is just ahead of the distances we've managed to extract from the Audi e-tron and Mercedes EQC. 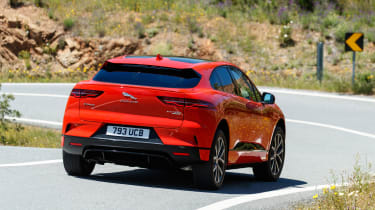 Jaguar says a 100kW charger can add range of around 240 miles in 40 minutes. There aren’t many chargers as powerful as this in the UK that can be used by anything other than a Tesla, but a network of 100kW (and faster) public chargers is developing quickly. A 50kW ‘rapid charger’ of the kind you find at motorway services will charge the I-Pace to 80% in around 85 minutes. If you get a 7kW charger or wallbox installed at your home, it can charge the car from zero to 80% in 13 hours – acceptable if you’re charging the car overnight for use the next day, and the bare minimum for reasonable charging times. A three-point plug is really for emergencies only, taking 24 hours to charge to 80%.

The I-Pace is exempt from normal road tax, because it doesn’t produce any exhaust emissions, but it does incur the £320 surcharge for years two to six of its life because it costs more than £40,000.

The entry-level I-Pace S is in group 49 of 50 for insurance, while other trims are in the top band, so premiums will be expensive. The rating is high because the car is powerful and has a high price tag – the Tesla Model X is in group 50 for the same reasons.

Electric cars have fewer moving parts than those with traditional petrol or diesel combustion engines, so on average they require less maintenance. Unfortunately, servicing remains expensive because, despite the I-Pace only requiring attention every two years or 21,000 miles, a three-year servicing plan costs around £1,000. We'd recommend consulting your Jaguar dealership about individual servicing costs before opting for this, as they might be cheaper.