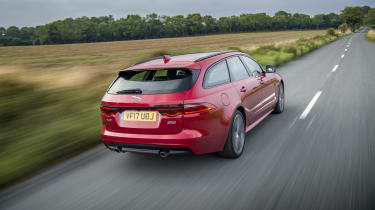 In fairness, a couple of extra mpg here and there is unlikely to have a huge effect on your decision-making process, but the XF Sportbrake’s CO2 emissions may.

The 161bhp 2.0-litre diesel’s figure of 118g/km is impressive in isolation, but the E220d Estate emits 109g/km and the 520d manages 114g/km. Without wishing to be accused of nitpicking, that’s the difference between a 23 (Mercedes), 24 (BMW) or a 25% (Jaguar) Benefit-in-Kind rate (BiK). Again, hardly life-altering stuff, but be aware the Jaguar leaves you liable to a greater tax obligation if you’re a company-car driver.

Although entry-level XF Sportbrakes with a list price (including options) of under £40,000 will cost £140 a year in road tax, cars with a higher price incur will incur an extra £310 annual levy, bringing total tax to £450 a year for years two to six of the car’s life.

Insurance groups for the XF Sportbrake saloon start in group 25 out of 50, which is a lower group than 5 Series and E-Class begin in. The range-topping 296bhp 3.0-litre diesel S version sits in group 42.

Jaguar’s three-year/60,000-mile warranty is average for the industry, but no more than that. Audi gives the same guarantee, while BMW and Mercedes’ policies run for the same length of time, but with no mileage cap.

Jaguar’s service plans are worth considering if you’re a private customer. A five-year/50,000-mile plan is £650 for 2.0-litre diesel saloons, while the 3.0-litre diesel is around £800 and petrol models cost just over £950 for the same period.