If you’re looking at executive estates like the Jaguar XF Sportbrake, it’s likely this section will be important to you. If you’re in a rush, know it’s a practical car that matches the 5 Series Touring, but plays second fiddle to the E-Class Estate in this area. 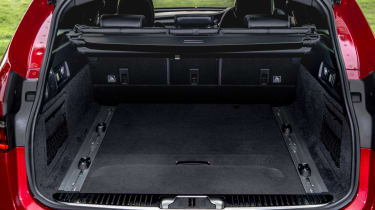 The slightly cramped rear seats of the XF’s predecessor have been dealt with for this latest model, and it’s spacious in the back. Legroom (unless you’ve a really selfish occupant in front of you) is strong in the rear and the slightly tapering roofline fails to have an impact on headroom. The glovebox and door bins are well sized and shaped, although the central cubby under the front armrest is shallower than you might imagine, being deep enough for a wallet and phone, but not much else.

Raw numbers first: at 565 litres, the XF Sportbrake’s boot is just five litres smaller than the BMW 5 Series Touring’s, but 75 litres down on the wardrobe-swallowing E-Class Estate. Drop the individually (40:20:40) folding rear seats and space rises to 1,700 litres, which is the same figure BMW quotes for the Touring and 120 litres down on the E-Class.

Data is all very well and good, but you’ll be impressed when you actually see the boot. The power-operated tailgate is the first positive point, while the numerous lashing points are also welcome. With the rear seats folded, the flat load area is another a strong point and the XF Sportbrake’s sleek lines definitely don’t come at the expense of practicality.

While full figures are forthcoming, we expect the Sportbrake to match the saloon’s towing capability. That would give it a 2,000kg limit, although the 161bhp diesel engine is capped at 1,600kg. A detachable tow bar costs £700, though for the sake of an extra £300 you could have an electronically deploying example, which you’ll most likely come to appreciate if you’re a regular tower.