This really is a game of two halves, because while the Jaguar XF Sportbrake should be a very safe car, it may not be a very reliable one.

There’s no way to sugarcoat this: the Jaguar XF saloon came last for reliability in our 2017 Driver Power customer satisfaction survey, which generated detailed reports on 75 cars. Over 30% of XF owners reported faults with their cars and while the XF Sportbrake is a new model, Jaguar had a rough time of it across the board in our Driver Power poll, with 25% of customers having problems with models across the line-up.

Other areas of the XF saloon ownership experience garnered more praise, with ride and handling being (rightly) praised, although the infotainment system got some (deserved) stick. 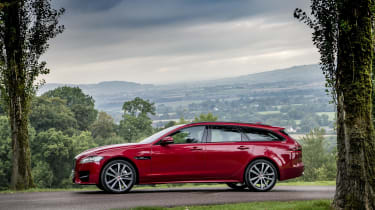 The independent safety experts at Euro NCAP have yet to test the XF Sportbrake, but the saloon is built on the same mechanical backbone and scored the full five stars. With 92% adult occupant and 84% child occupant ratings, the XF impressed its testers.

And while nobody wants to be hit by a car while out walking, the XF is one of the better cars out there when it comes to pedestrian impacts: its 80% score in this area was partly thanks to the active bonnet, which pops up if it detects an imminent impact with a pedestrian, keeping soft body parts away from hard engine components.

If you want to make the XF Sportbrake even safer, tick the £2,000 ‘Active Safety Pack’. This bundles adaptive cruise control with blind-spot monitoring, rear cross-traffic alert (which scans behind you when reversing) and lane-keeping assistance. You can also get beefier brakes for £200, and these seem too cheap to pass up.

The £500 self parking system is, in our experience, more likely to be a gimmick than a useful feature, but the 360-degree bird’s-eye reversing camera will make low-speed manoeuvring safer, even if Jaguar asks a hefty £1,000 for this.