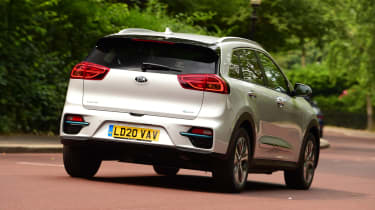 The phrase 'electric car' tends to mean either of two things to enthusiastic drivers – electrifying acceleration and an exciting time behind the wheel, or a rather dull, uninvolving experience. The e-Niro actually offers something in the middle, with far more sprightly acceleration than most family cars – Kia claims 0-60mph is possible in just 7.5 seconds, while the top speed is pegged at 104mph.

That comes thanks to its 201bhp electric motor, which is also used in the Hyundai Kona Electric and also uses the same 64kWh battery.

The very respectable power – delivered from the instant you press the accelerator, in typical electric car style – makes light work of urban traffic. It also puts fun higher on the agenda than you might expect of a zero-emissions family car, even when you escape the urban environs and find yourself on a twisty road. Here, the low-mounted battery pack brings the centre of gravity nearer the road for a greater feeling of stability in corners, although the nose will readily run wide if you carry too much speed into a corner.

There are three driving modes to choose from called Eco, Comfort and Sport. Selecting Sport mode sharpens the throttle response and adds extra weight to the steering, allowing you to throw the e-Niro into corners with far more enthusiasm than you’d expect for an electric family car. Even in Eco or Comfort modes, the e-Niro is capable of beating hot hatches from a standing start to 40mph with ease, meaning it has no issues getting up to motorway speeds or merging with fast moving traffic.

With only one forward gear, the paddles either side of the steering wheel fulfil an unexpected purpose – they control how aggressive the regenerative braking system is, effectively increasing the amount of 'engine braking' you'll feel when you lift off the accelerator. In its most severe setting, the car slows rapidly when you release the accelerator, even if it doesn't quite allow one-pedal driving in the manner of the Nissan Leaf.

For 2020, Kia has introduced a new entry-level e-Niro with a smaller 39kWh battery and a 134bhp electric motor. We’ve yet to drive it but its claimed performance figures of 0-62mph in 9.5 seconds and a top speed of 96mph suggest it’ll be very competent.