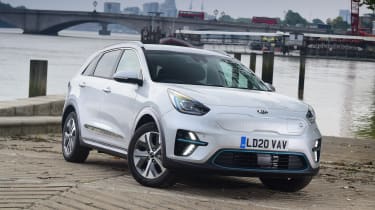 Based on the latest WLTP fuel economy and range measurement regime, Kia claims a 282-mile battery range for the 64kWh version of the e-Niro. That's enough to place the car among the very longest-range EVs that have been launched so far, running top Tesla models very close for a fraction of their prices. 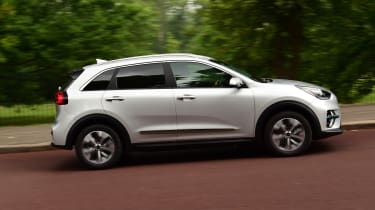 A 282-mile range may be considerably less than a petrol-fuelled car can manage on a full tank of fuel, but the truth is that most drivers only find occasional need to travel more than 300 miles between overnight stops. For many, the e-Niro’s range means a single weekly charge will suffice, which doesn’t just further reduce running costs but also greatly increases convenience.

The e-Niro is also offered with a smaller 39kWh battery and in this form it’s capable of up to 180 miles between charges. While this is less than other electric SUVs like the Peugeot e-2008, which is capable of 193 miles on a charge, it could still be a decent (and less expensive) option for those who drive shorter distances.

When battery range does begin to dwindle, charging is done using a CCS or Type 2 cable fitting into the port hidden behind a flap in the front grille. A Type 2 public charging cable and three-pin plug for charging from a wall socket are standard. 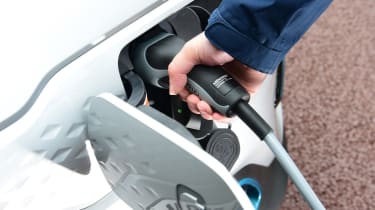 Using a 50kW public fast charger drastically reduces the time it takes to top up the 64kWh battery, taking around an hour and 15 minutes to charge from zero to 80%. Kia says this could be sufficient for more than 242 miles of driving, although this will naturally depend on the way you drive the car. Every e-Niro is also capable of using a 100kW rapid charger, with an 80% charge taking under an hour regardless of battery size.Topping up the battery via a 7.2kWh home or public charger is also easy, with a full recharge of the 64kWh model taking around 10 hours and the smaller 39kWh estimated to take around seven hours.

Irrespective of how you drive, company-car users will always enjoy the low rate of Benefit-in-Kind (BiK) tax that electric cars attract – zero-emissions vehicles benefit from a 0% BiK banding for the 2020/21 year, rising to 1% in the 2021/22 tax year.