Cars like the Range Rover Sport are rarely designed with a view to world-beating running costs; this is not an SUV that anyone will be able to run on a shoestring. It’s an expensive car to buy, too – prices rival the Audi Q8 and Porsche Cayenne Coupe. If fuel economy and low emissions are your primary concerns, the Range Rover Sport P400e plug-in-hybrid will be your best choice, but it's not cheap and offers the biggest benefits to drivers making short trips.

In theory, the P400e plug-in hybrid is by far the most fuel-efficient in the range. Its 2.0-litre petrol engine is combined with a battery and electric motor, and promises up to 86.4mpg if you take full advantage of its 26-mile claimed electric range. Emissions of 74-85g/km of CO2 mean a low Benefit-in-Kind (BiK) company-car tax rating, too, which will give this pricey PHEV appeal among business users. It's available across most trim levels – but with prices starting at £72,000, it’s more expensive to buy than the diesels. Buyers will also need to be very careful when choosing the specification of their P400e if they want to drive into the London Congestion Charge zone for free, as the cut off for this is 75g/km. 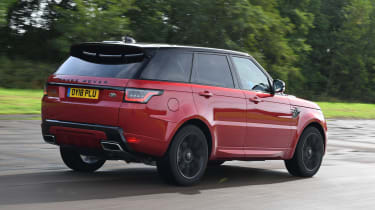 The 3.0-litre D300 diesel manages up to 33.8mpg, emits 220g/km of CO2 and occupies the highest BiK bracket. There's also a more powerful D350 version of the same engine (that effectively replaces the SDV8 diesel), returning up to 29.8mpg and emitting 249g/km of CO2. It also sits in the highest BiK bracket and is only available in the higher trim levels, costing from over £85,000.

Both supercharged V8 petrol engines are the highest polluters, producing over 300g/km of CO2, placing them in the highest brackets for both BiK and initial registration tax. As expected, both models struggle to better 18-20mpg at best.

If you can live without a five-second 0-62mph time and still want to use petrol rather than diesel, the 2.0-litre P300 returns a slightly less outrageous 25.5mpg, but its 249g/km CO2 emissions mean business drivers still suffer a top BiK rate.

The P400 combines a turbocharged 3.0-litre straight-six petrol engine and a mild-hybrid assistance system. It uses an electric generator and a small 48-volt battery to harvest some of the energy created when braking. This power is then used to assist the engine when accelerating, improving its overall efficiency. Claimed fuel economy figures are 27.1mpg and CO2 emissions come in at 237g/km.

The Range Rover Sport certainly isn’t cheap to insure, with the SVR version sitting in the highest possible insurance group (50). The 3.0-litre SDV6 HSE model is in group 43, while the V8 petrol sits in group 49. Suffice to say, no version will be cheap to insure.

The Range Rover Sport comes with a three-year/unlimited-mileage warranty, which is similar to that offered by the majority of rivals. Some, such as Audi and Volkswagen with the Q7 and Touareg, have a 60,000-mile limit.

Land Rover recommends servicing the Range Rover Sport every year or 16,000 miles – whichever comes first. It also offers to cover the cost of services for five years for a one-off payment.