Incredible off-road performance and towing ability when you need it, plus a comfortable limousine-like ride when you don’t

The latest Range Rover weighs 420kg less than its predecessor, which has a positive effect on handling and performance and for such a big, bulky car, it certainly doesn’t disgrace itself on a twisty road.

While all models handle surprisingly neatly, the SVAutobiography Dynamic shows exactly what the Range Rover can do. Sure, it won’t shrink around you and you’re always aware of the weight and bulk of what you’re driving, but with lowered ride height and modifications to the suspension and steering, fast corners can be taken with confidence.

Step into one of the SVAutobiography’s less muscular sisters and there’s a profound difference – they feel looser, less responsive and more prone to leaning in corners. However, the high view out inspires confidence: the car is easy to place and swift cross-country progress is a relaxing experience. Occupants are well insulated from the outside world and the suspension is comfortable so you’re likely to adopt a more sedate driving technique.

With all its comfort and ability to take corners without tripping up, it’s all the more impressive that the Range Rover is still one of the most capable off-roaders you can buy. Its Terrain Response technology adjusts the suspension and traction-control systems to suit the kind of surface you're driving on. The car is capable of wading through water, crossing mud and ruts and ascending and descending steep slopes with ease.

All engines send their power through an eight-speed automatic gearbox, which works smoothly around town, yet can also provide quick, sudden shifts when accelerating quickly.

If you’re buying your Range Rover as a sensible, mile-munching workhorse, all you really need is the entry-level 3.0-litre D300 engine. New for 2020, this straight-six with mild-hybrid tech will launch the car from 0-62mph in 7.4 seconds, which is about what you'd expect from a sporty hatchback. This engine is also incredibly quiet and smooth, to the extent that you'll only ever really hear it if you accelerate as hard as you can, and even then it doesn't sound bad.

The D350 is a more potent version of the same engine with 345bhp, which makes motorway cruising terrifically relaxing. It’s quick, too – acceleration from 0-62mph takes 7.1 seconds and it even makes a nice noise, which is unusual for a diesel. With as much pulling power as the supercharged V8 petrol, the Range Rover gets moving surprisingly quickly, and the automatic gearbox does a good job of keeping it in its deep power band. 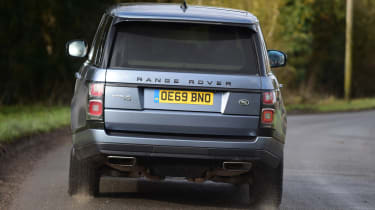 At the very top of the range is the SVAutobiography Dynamic, with its 5.0-litre V8 supercharged petrol engine. It’s a remarkable engine, producing 557bhp and a fantastic noise from the exhausts, and can catapult the 2.3-tonne SUV from 0-62mph in just 5.4 seconds – such performance was the stuff of supercars until fairly recently. It's the same engine that you'll find in the performance-oriented Range Rover Sport SVR, though it’s been tuned to be a little smoother in the flagship, full-size Range Rover. You can also buy a slightly less extreme version of this engine in other Autobiography models.

Nice as they are, we struggle to recommend either, simply because the diesels are so good. All engines give the Range Rover a top speed of at least 130mph, but the V8 petrol is capable of taking it to an electronically limited 155mph.

The P400e plug-in hybrid, combines a 2.0-litre turbocharged petrol engine with electric power for a total of 399bhp. This gives it 0-62mph time of 6.8 seconds, along with the ability to drive using electric power alone for around 31 miles. We've reviewed the Range Rover P400E separately, and found its ability to drive in silent electric mode suited the luxury feel of the big SUV, especially in town.

The most recent addition to the range is the P400 MHEV, which combines a 3.0-litre straight-six petrol engine and a 48-volt mild hybrid system to produce 395bhp. This powertrain can achieve a 0-62mph time of 6.4 seconds, putting it firmly behind the V8 petrol engines in the range. Considering the power and pace on offer, and the fact the P400 MHEV isn't far off the efficiency of the D350 diesel engine, it should appeal to low-mileage drivers who don't spend too much time on the motorway.