The Mercedes E-Class' diesel engines provide plenty of power, but the BMW 5 Series and Jaguar XF are still more fun to drive

E-Class owners can choose from several driving modes, including Comfort, Sport and Sport+. While the sport modes do sharpen up the car’s gearbox and throttle response, the steering still feels a little inert and lifeless, so there isn’t a great deal to be gained from taking it out of comfort mode.

The E-Class isn't as sharp to drive as an XF or 5 Series, but there's still enough grip to allow for spirited cornering and it always feels safe. The E-Class is predominantly about cruising around in swift comfort, and it certainly ticks that box. 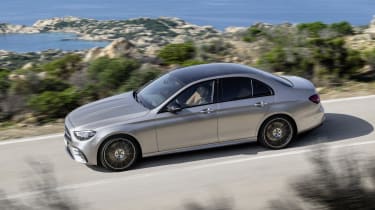 Although lighter than the previous generation, the current E-Class is still a heavy car and you can feel this in fast corners. Adjustable dampers are fitted as standard with Comfort, Sport and Sport+ driving modes, but even the latter is not quite enough to wrestle the driver’s car crown away from the BMW 5 Series, though. Mercedes' focus on comfort can mean that the driver feels slightly detached at times.

The E 300 e is affected slightly by the extra weight of its electric motor and batteries, which lead to a slightly less nimble feeling than other models in the range. It isn't as engaging as the similarly powered BMW 530e, although we did find it rode more smoothly. Naturally, it’s whisper-quiet in electric mode, and remains muted up to motorway speeds.

You can choose the 4MATIC four-wheel-drive system on most models, and it’s mandatory on the AMG E 53 and E 63 S. It comes into its own in wintry conditions, doubling the chance of at least one of the wheels finding traction on slippery surfaces. It also offers benefits during hard cornering and acceleration, but in fine weather most drivers will be hard-pressed to notice a difference.

The latest 2.0-litre diesel engine in the E 220 d gives the E-Class plenty of smooth power. This produces 191bhp and can cover 0-62mph in 7.3 seconds. Adding 4MATIC four-wheel increases the 0-62mph time by two tenths because of its extra weight.

All models have a nine-speed automatic gearbox as standard, which changes gear fluidly and responds immediately when you summon extra acceleration. Thanks to the impressive power from all engines, it’s rare for the gearbox to drop through many gears when maximum acceleration is called for, which helps keep journeys as quiet and serene as you’d expect from a car like the E-Class.

For those who crave a bit more performance and are willing to sacrifice some economy, the E 400 d 4MATIC really is quick. Under the bonnet is a 335bhp 3.0-litre straight-six diesel that gets the car from 0-62mph in just 4.9 seconds with a 155mph top speed. That figure also owes much to the engine’s incredible pulling power, which is even stronger and more noticeable than in the E 220 d. Overtaking is easy and the six-cylinder engine even makes a pleasant noise under acceleration. 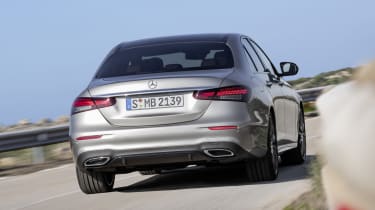 There are now several electrified versions of the E-Class, including the E 300 de diesel and E 300 e petrol plug-in hybrids, which cost around £47,000 to buy. The choice, then, will largely come down to which fuel you'd prefer. With emissions of less than 50g/km, both easily qualify for low BiK bands for company-car drivers. Drivers and private hire firms frequenting cities will also be able to enter low emission zones like the one covered by the London Congestion Charge for free.

With a 2.0-litre petrol engine and electric motor, the E 300 e produces an impressive 316bhp and 700Nm of pulling power, so feels genuinely quick off the line. However, the petrol engine can sound a bit coarse if you really floor the throttle. Luckily, the E-Class is very refined at all other times.

In the AMG E 53 Mercedes’ ‘EQ boost’ mild-hybrid technology has been employed to improve performance rather than cut costs. The turbocharged straight-six petrol already has 429bhp and the hybrid system adds 22bhp for brief periods. Four-wheel drive helps it get from 0-62mph in just 4.9 seconds – not bad for a big saloon car.

The Mercedes E 200 is the entry-level model, with a 2.0-litre petrol that produces 182bhp and pulls quite strongly thanks to its turbocharger. A time of 7.7 seconds to get from 0-62mph means it’s fairly quick.

It’s hard to believe there’s a faster E-Class than the AMG E 53, but that’s emphatically the case. In fact the AMG E 63 S, fitted with 4MATIC four-wheel drive, can get from 0-62mph in just 3.4 seconds. We’ve reviewed this super saloon separately.