With as much as 214bhp, instant torque and no gearchanges, the Nissan Leaf offers effortless acceleration

As it has more performance and the same near-silent driving experience as the first-generation Leaf, few are likely to be disappointed with the latest model. It’s not especially sporty, but drives well enough and its e-Pedal is a successful innovation that's now been reproduced by most rivals for their EVs.

It's also equipped for autonomous driving. The Leaf's ProPilot technology is fitted as standard in the top of the range Tekna model, but an option elsewhere. It can control the car's steering, braking and acceleration where its sensors can see clear road markings and the car in front, and the same technology allows the car to park itself and activate the emergency braking. It's technology not always seen on cars of this price. 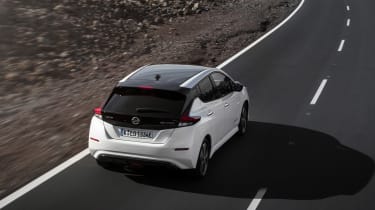 Boasting 148bhp, the standard Leaf has 40bhp more than before, giving it a noticeable performance boost. Accelerating from 0-62mph now takes 7.9 seconds instead of 11.5, which is faster than the Hyundai Ioniq Electric and its nearest rival – the Volkswagen e-Golf. The BMW i3 and Tesla Model 3 are both quite a bit quicker, but with prices that reflect their higher echelon of performance. The Leaf e+ has a larger, 62kWh battery. This increases power to 214bhp and cuts the 0-62mph time down to 6.9 seconds. It also raises the car's top speed from 90mph to 98mph.

Driving the Leaf on British roads is a breeze, with smooth and effortless acceleration accompanied by a distant hum from the motor. Thanks to the nature of electric motors, there’s no hesitation when you press the pedal, just an instant increase in pace. The steering is quite light, making it well suited to urban driving, while the suspension can be slightly firm at times. The Leaf e+ Tekna features a larger and heavier battery pack with slightly stiffer suspension to compensate for the additional weight - but is rarely uncomfortable.

As you’d hope from such an innovative car, Nissan’s e-Pedal technology represents a real step forward in electric car control. Once activated, this allows you to drive the car using just the accelerator pedal, with the traditional brakes only needed to come to a more abrupt halt. Taking a few hours to get used to, you squeeze the pedal to speed up, and gradually reduce pressure to slow down and stop. This uses the regenerative force of the electric motor to reduce your speed, not only reducing your fatigue in traffic but also putting more energy back into the battery pack and boosting driving range.