As manufacturers embrace electric propulsion as the future of motoring, the development of battery capacity has really gathered pace. Not only can the latest lithium-ion battery packs hold more energy without taking up more space, they’re also faster to charge. As public charging points are becoming more common – and even starting to appear at petrol stations – how long a quick top-up takes is seen as a crucial selling point.

Similarly important is the government's decision to incentivise electric cars from April 2020, reducing Benefit-in-Kind (BiK) liability for company-car drivers to zero. This will make the Leaf and rival EVs significantly cheaper to run than petrol and diesel equivalents, boosting their desirability among business drivers. 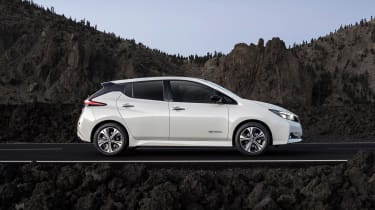 The second-generation Leaf has roughly double the driving range of the car that launched in 2011, despite being faster. Buried deep within the Leaf’s bodywork is either a 40kWh or 62kWh battery pack, depending on which model you go for. The smaller battery provides a range of up to 168 miles, while the bigger one claims 239 miles.

The Leaf has 'e-Pedal', which increases the electric motor’s energy recuperation to slow the car more aggressively. According to Nissan, the e-Pedal is so effective that you can drive the car rarely using the brake pedal. In real-world driving it is simple to get used to, activating the brake lights as you decelerate, but you may still find yourself reaching for the brake pedal when you’re travelling more quickly.

The ranges possible from both variants of the latest Leaf are a big increase over the 155-mile official range of its predecessor. The 62kWh Leaf e+ is capable of going almost as far as the ‘Standard Plus’ Tesla Model 3, which has a 50kWh battery pack for a range of around 254 miles. The charging flap has been smartly redesigned to allow you to plug in the charging cable without bending down.

Nissan estimates that the Leaf’s running costs for the majority of motorists will be around 85% less than those of a petrol or diesel model, while maintenance is expected to be approximately 75% cheaper. Other benefits include free annual road tax and exemption from the London Congestion Charge, as well as free parking and charging in some locations, along with a £3,500 Government grant towards buying an EV. As time goes on, it’s also likely that more cities will introduce zero-emission zones or emissions-based tariffs, with Oxford City Council already proposing plans to ban petrol and diesel cars from its city centre. 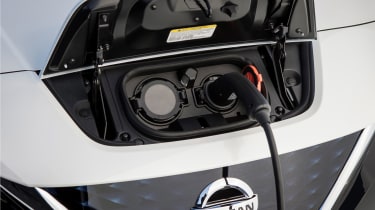 Charging both the 40kWh and 62kWh models using rapid chargers will replenish 80% of battery capacity in less than an hour, making it possible to take long trips, so long as you don't mind taking a few breaks. Home charging using a domestic three-pin plug will take far longer (around 21-32 hours), but Leaf owners are likely to view this as a last resort. Using a 6.6kW wallbox reduces the charging time to around 6.5 hours for the 40kWh battery, with the 62kWh version taking around 10 hours. It's worth noting that while the standard Leaf can rapid charge at up to 50kW, this is increased to 100kW for the e+, even if CHAdeMO 100kW chargers remain rare at the moment. It's a shame the Nissan Leaf isn't compatible with CCS charging, as this is rapidly becoming the standard plug type across Europe, but there are currently around 1,600 CHAdeMO public chargers across the UK.

In testing, we found the Nissan Leaf e+ could manage just over 210 miles on a charge, which is 29 miles fewer than Nissan claims at an average of around 3.5 miles/kWh.

Using a smartphone app, it’s possible to check the battery life, schedule charging, find charging points and set the ventilation to cool or heat the Leaf remotely. However, it has quite poor user ratings, requires frequent updates and sometimes fails to connect with the vehicle.

The Nissan Leaf finds itself in insurance group 21, regardless of trim level. This is one group lower than the previous model and a group higher than the less powerful e-Golf. The Renault ZOE sits in groups 15 and 16, while the BMW i3 matches the Leaf’s rating. Insurance groups haven’t been released for the Tesla Model 3 yet, but it’s likely to be quite a bit more costly to cover, owing to its faster acceleration.

Most Nissan models come with a standard three-year/60,000-mile warranty and the Leaf offers the same coverage. However, it has a dedicated EV warranty to cover electrical items such as the motor and battery for five years or 60,000 miles and on top of that, the battery is guaranteed to retain 75% of its charging capacity for eight years or 100,000 miles. This matches brands like Volkswagen, but falls a long way short of the seven-year warranty Kia provides. If you think it’s too short, you can opt to extend it to five years, but this costs extra.

With far fewer moving parts than a petrol or diesel model, servicing the Leaf should be relatively easy and quick. As discussed above, it should also be cheaper, with no expensive consumables like oil, spark plugs or cambelts and many components like tyres and brakes lasting longer too.