The Renault Megane engines are reasonably powerful, but handling and gearbox not the best

The Renault Megane can be chosen with one of two engines, a diesel and a petrol, the first of which is the dCi 115 diesel. There’s also a 138bhp 1.3-litre petrol, badged TCe 140. It’s the petrol model, unsurprisingly, that’s the better of the two to drive and significantly faster too. The TCe 140 accelerates from 0-62mph in 9.5 seconds, while the diesel dCi 115 takes 11.1 seconds.

The 113bhp dCi 115 Megane is pretty good to drive, but it's still not quite as satisfying as a Ford Focus or Volkswagen Golf for keen drivers.

Manoeuvrability around town at low speeds is made easy by the light steering, but it also has the effect of robbing much of the feel and feedback that cars like the SEAT Leon offer. Iconic and GT Line feature a ‘Multisense’ system, which changes the way the car responds. A Sport mode adds a little weight to the steering, but it feels artificial and doesn’t convince.

Even the sporty, driver-focused GT Line model can’t match the sharpness of some rivals: the SEAT Leon and Mazda3 are both geared more towards entertaining you. 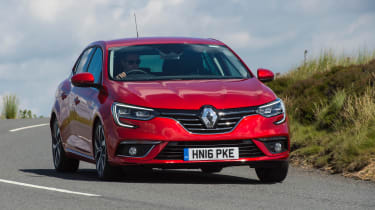 The petrol engine is a surprisingly sprightly 138bhp 1.3-litre turbo that suits its six-speed manual gearbox, and in this form it accelerates from 0-62mph in 9.5 seconds. A seven-speed automatic gearbox is now available, with a slightly quicker 0-62mph time, but it’s slightly less frugal. Both have a top speed of 127mph.

The diesel is a 1.5-litre with 113bhp. Getting the most out of it involves lots of gearchanges, but it has plenty of power, particularly at low revs. Again, there’s an automatic transmission available, cutting the manual's 11.1-second 0-62mph dash down to 10.6 seconds.