It’s pleasing to find the good driving manners that characterise recent Renaults are also a feature of the latest Scenic. It’s near enough the same weight as the previous generation Mk3 model and that was no lightweight – but it still has an agile, composed demeanour, with precise, responsive steering. 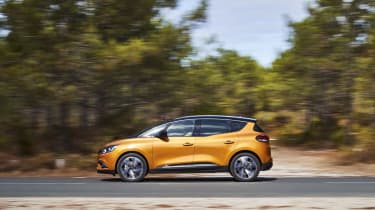 Body lean is well controlled by the suspension and the wide spacing between the wheels helps the car to stand tall in corners. When handling limits are reached, though, the Scenic behaves less tidily than the Megane, with less grip and softer suspension than its hatchback cousin.

Within those limits, though, it handles well, no doubt helped by those massive 20-inch wheels, which have been developed in conjunction with the suspension on the new car.

The turbodiesel engine offered in the latest Scenic is a 1.5-litre dCi 120 with a manual gearbox. Performance figures for this new engine haven't been released yet, but it's expected to get from 0-62mph in around 11 seconds.

A new 1.3-litre petrol engine arrived at the start of 2018, replacing the 1.2-litre TCe. Badged as the TCe 140 model, it produces 138bhp and gets the Scenic from 0-62mph in 10.1 seconds. This engine has been tuned to improve flexibility, with a wider spread of power from low to high revs.