It should provide some comfort that the Renault Twizy has a chassis developed by Renault’s crack performance model team, Renaultsport.

Although the Twizy is narrow, short and tall, it feels surprisingly stable and offers plenty of grip when cornering at speed. That’s partly due to the car’s firm suspension, which is also the Twizy’s Achilles' heel. It won’t take long before you’re watching out for – and dodging – small bumps and large potholes because the Twizy crashes over them, rather than smoothing them out. 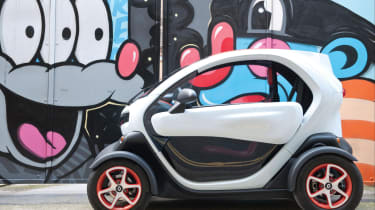 In truth, the novelty of driving this car can wear off pretty quickly if you don't have smooth roads, even though the steering is responsive and gives plenty of confidence when cornering.

You only need to look at the Twizy to know it's good fun to drive. You get in, press the Drive button on the dashboard, the 17bhp electric motor powers up and you’re off. The whole vehicle only weighs 450kg, so it's incredibly responsive and will quickly whizz up to its 50mph top speed – more than enough for city driving.

It takes just over six seconds to reach 30mph, and 18-37mph takes a little over eight seconds. It’s not quick, but fast enough to keep with round-town traffic. Although the Twizy is allowed on motorways, we wouldn’t recommend it.

The forward and reverse gears are also activated by large buttons on the dashboard, where a blue digital readout displays your current speed and remaining range. The electric motor is basically silent, but there is of course lots of wind noise when you hit 30mph – even the optional windows let sound in through their slats, which are needed to prevent fogging up.