Although the Renault Twizy is cheaper to buy than a Smart EQ ForTwo – its closest four-wheeled competitor – it's still no bargain at almost £11,000 including the plug-in car grant. You can also buy the electric Skoda Citigo iV for not much more than a Smart and the Citigo iV is capable of motorway speeds and carrying more passengers, and it comes with four doors and windows as standard.

If price is your main consideration, it’s worth remembering that you can buy a basic Dacia Sandero for under £7,000, which is almost £4,000 less than the cheapest Twizy. But there’s no denying the Twizy will be cheaper to run day-to-day, and oozes charm.

If you're dead-set on an electric car, then it's worth knowing you can buy a used Renault ZOE or Nissan Leaf for less than the price of a new Twizy.

Renault says the Twizy costs around £1 to charge, for which you’ll get enough power to travel up to 50 miles on a warm and mild day, but more like 30 miles when the weather is cold. Using a household socket, a full charge takes around three-and-a-half hours.

Many potential electric car owners have been put off by the cost of battery replacement, because like any battery pack, those in a car have a limited life. Renault used to offer a battery lease scheme, which cost from £45 a month. A range of fees were offered, depending on the length of the lease agreement and the number of miles covered a year. New Twizys have the battery cost included. 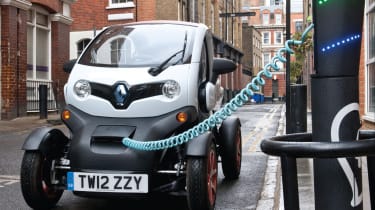 There are other benefits of driving an electric vehicle too. It is exempt from the London Congestion Charge, and there are a number of car parks which offer free spaces for EV (electric vehicle) drivers.

But the Twizy isn’t eligible for the government’s electric car grant for a range of reasons – it is classed as a quadricycle, not a car; nor is it able to cover more than 70 miles on a charge or travel faster than 60mph.

The Renault Twizy insurance groups range from 10 for the entry-level Expression to 11 for the Dynamique and Cargo models. That’s higher than the Renault ZOE or Nissan Leaf.

The Renault Twizy’s vehicle and electric powertrain warranty lasts for five years or 100,000 miles, whichever comes soonest. It also comes with a separate battery warranty, which lasts for three years or 30,000 miles. The battery warranty should provide all the perks of the previous system when owners leased their batteries. This means you get three years breakdown cover, even if you run out of charge, and a commitment to replace or repair the battery should it fail to retain 75% of its original charge capacity.

The Renault Twizy service intervals are long. It will only need to see a dealer every year or 18,000 miles (whichever is sooner). A three-year service plan costs a reasonable £100 but increasing servicing and the warranty to include the fourth year sees prices shoot up to £400. Once it’s out of warranty, you’ll need to take it to either a Renault dealer, or a garage that specialises in electric vehicles, because most independent garages won’t have the correct training to deal with high voltage electrical equipment.