The Renault ZOE is quiet and nippy around town, but in other regards feels 'normal'

The Renault ZOE's ride quality is firm but not uncomfortable. On UK roads at lower speeds, only the worst road surfaces are really noticeable. At motorway speeds, the ZOE is only truly composed on the smoothest roads but it does make up for this lack of refinement with near-silent running. The ZOE is a very relaxing car to drive as a result, although it does make a distinctive noise at lower speeds to warn pedestrians and cyclists of its presence.

Also, because of its electric motor, the car picks up speed pretty quickly – it’s great at dashing away from the traffic lights or nipping into a small gap in traffic. There’s enough power to make town driving easy and maintain motorway speeds with relative ease. However, with the ZOE in range-maximising ‘Eco’ mode, the car’s performance is noticeably slower thanks to a pressure step in the travel of the accelerator pedal that prevents you from using full power unless you really need it.

While it offers brisk pace in a straight line, the ZOE’s larger batteries mean it is not a car for keen drivers. Weighing it at nearly 400kg heavier than a Clio, it does have a tendency to roll around in slow, sharp corners, which makes it feel a bit lethargic at times. There’s very little feel in the steering too, but it is at least nicely weighted. The driving experience is not helped by the driver’s seat either, which lacks support and doesn’t offer height adjustment. 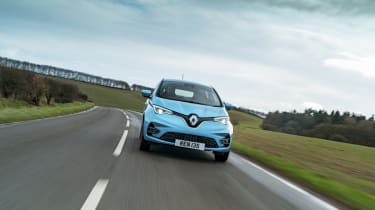 Introduced in 2019, the R135 electric motor boasts 28bhp extra power over the R110 models and lots more power than the old Q90 model, which further drops the time it takes to accelerate between 50 and 75mph. As a result, it’s better to drive on fast A-roads and motorways, although your battery range will drop pretty quickly if you make the most of its performance.

Just like the Nissan Leaf and BMW i3, Renault says the ZOE can be driven with a single pedal. Even in its strongest ‘B’ mode, the regenerative braking is not as effective as the Leaf or i3, so coasting up to a junction to come to a halt without using the brakes requires a little anticipation.

Around town, the raised driving position is beneficial as it gives good visibility of the road ahead. The ZOE is easy to park, too, especially with the rear parking sensors that are standard on the Iconic and GT Line models. 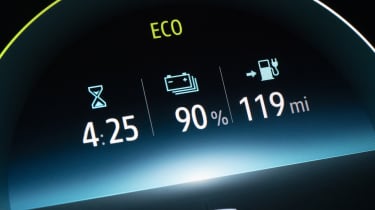 The 106bhp R110 motor produces more power than the original R90, without adding extra weight or taking up more space. It offers a 0-62mph time of 11.4 seconds, and you probably won't notice its extra power around town, but it has been designed to keep accelerating more quickly at higher speeds.

Alongside the R110, which has been carried over from the last version, there’s a new R135 motor offers more power and range. Acceleration from 0-62mph in this model takes 9.5 seconds - almost two seconds quicker than the R110.