The Skoda Superb Estate is a car which offers impressive fuel economy considering its size, with both the petrol and diesel engines performing well in this regard. Choosing a four-wheel-drive version does bring an increase in running costs and is an option best considered only if you really need it.

The 148bhp 2.0-litre TDI diesel is the most economical of all; clean enough for affordable company-car tax and enjoying a huge theoretical range on a single tank of diesel, as proudly claimed by Skoda. 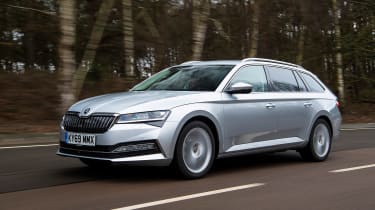 That 2.0-litre diesel can manage an impressive 56.5mpg in fuel economy and from 131g/km of CO2, with the next most fuel-efficient choice being the 118bhp 1.6-litre TDI diesel. Coupled to the seven-speed DSG automatic gearbox (which comes as standard), it returns up to 49.8mpg and CO2 emissions from 149g/km for a reasonable Benefit-in-Kind (BiK).

The top diesel is the 187bhp version of the 2.0-litre TDI engine, and even with more power it still achieves up to 47.9mpg while emitting CO2 from 153g/km, with BiK a couple of percentage points higher than the 148bhp engine. If you add four-wheel drive, fuel consumption increases to 44.8mpg, and it’s subject to a higher BiK bracket too.

The 1.5-litre TSI petrol with 148bhp can be chosen with any of the trim levels apart from Laurin & Klement or the entry-level S trim, and can return up to 43.5mpg thanks to its cylinder-deactivation technology, which allows the car to run on just two cylinders under light throttle. Choose a DSG automatic gearbox, however, and efficiency drops to 42.2mpg, plus it slots into a higher band than the manual version.

Above that is a 2.0-litre TSI petrol engine with 187bhp, which provides a bit of extra power and performance but returns slightly lower running costs. Skoda claims 38.2mpg for this engine and, with CO2 emissions from 168g/km, BiK is higher for this model than the 1.5-litre engine. For most people, we’d say the 1.5-litre is more than sufficient if you’re looking at the petrols.

At the top of the range is a 268bhp 2.0-litre petrol engine that’s a fast but rather niche choice. It comes with four-wheel-drive as standard and will return around 33mpg, while its CO2 emissions from 191g/km means it's in one of the highest BiK brackets.

A plug-in hybrid Superb iV model our top pick for company-car drivers. That's thanks to its low 32-42g/km CO2 emissions, making BiK far lower than for any other version in the range. Fuel-efficiency is rated at up to 201.8mpg, but in real-world driving this will depend on how often you charge its 13kWh battery.

Road tax on all models of the Superb costs £150 a year, unless the price creeps above £40,000 (including options), in which case a surcharge of £325 in years two to six increases road tax to £475 during that period. The plug-in hybrid model receives a £10 reduction. 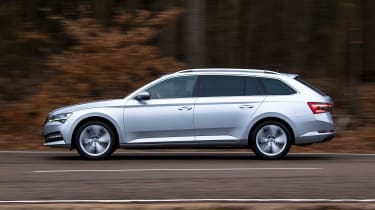 The insurance ratings for the Skoda Superb Estate vary across the range – as you’d expect when there’s such a choice of engine and trim combinations. The 118bhp 1.6-litre TDI diesel in S trim enjoys the lowest rating; it’s in insurance group 12. Most other models are between groups 13 and 18.

The most powerful 2.0-litre TSI models are more expensive to insure, especially the 268bhp version with its group 28 insurance rating. You’ll find the most powerful diesel engines in groups 23-25.

The easiest Skoda Superb Estate servicing regime to understand is the fixed interval plan, with a service due every 10,000 miles. Low-mileage drivers and anybody mainly making short journeys will find this cost-effective, as will those who do a lot of driving in an urban environment with lots of stopping and starting. The first two services can be included in a service plan costing under £300 up front.

Alternatively, sensors on the car monitor the way the car is driven and can determine when a visit to the garage is due, which could be anywhere from 9,000 to 20,000 miles, but services won’t be any longer than two years apart. Skoda calls this 'variable interval servicing' and it makes sense if you mostly drive on motorways, making long journeys at high speeds, where the car is less likely to be subjected to the stresses of stop-start driving.

Like all Skodas, the Superb Estate is covered by a solid if unspectacular three-year/60,000-mile manufacturer's warranty – some way short of the five and seven-year cover you get with a new Hyundai and Kia respectively.