You'll have to pay to use the Supercharger network, but a CCS port opens up the playing field 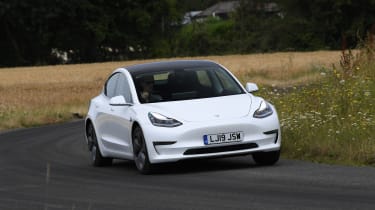 The Model 3 is famously the first ‘affordable’ Tesla, following a long-held plan to release profitable and desirable sports, luxury and SUV all-electric models first in order to make a splash in the industry and help establish the brand.

Being the smallest and lightest model in the line-up, the Model 3 is also the most efficient. So, while every all-electric car should have low running costs, the Model 3 can go further between charges. Unlike earlier models, charging a Model 3 using Tesla's own Supercharger network is no longer free (it is if you buy the more expensive Model S and Model X) but it is also the first Tesla to get a CCS charging port, opening up the use of many other public charging networks. Tesla's Supercharger network also gives Model 3 owners an advantage over the Polestar 2, because according to our Driver Power survey of charging networks, it’s by far the best to use.

Business drivers are likely to put the Model 3 on a pedestal because it sits in the lowest Benefit-in-Kind taxation band, while free road tax will also appeal to private customers.

Three versions of the Model 3 will be available initially, starting with the Standard Range Plus version. This gets a smaller battery capacity, giving a WLTP range of 267 miles, which will still be sufficient for some customers, and is almost 100 miles more than a standard Nissan Leaf - Europe's best-selling EV in 2018.

Next up is the Long Range AWD model with an impressive 360-mile range, which should be able to get you from London to Paris (via the Channel Tunnel) non-stop. While still using the same lithium-ion battery, the Performance model has a slightly shorter range of 352 miles because it's tuned to deliver ultimate acceleration instead of economy. Both of these comfortably beat the Polestar 2's range of 292 miles.

As an incentive for prospective buyers of Tesla's first cars, public charging via the Tesla Supercharger network was offered free of charge, but sadly that's not the case with the Model 3. Prices are reasonable, though, and crucially this is also the first Tesla with a CCS charging port. Unlike a proprietary charger, this means owners can use any public charging posts that support CCS. 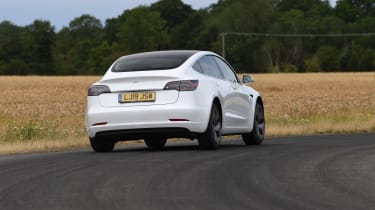 The Model 3 supports fast-charging, which replenishes the battery pack to around 80% in as little as 30 minutes using the latest Supercharger. Of course, many owners will carry out the majority of charging at home, where a 7kW wallbox will charge the car to 100% in around 12 hours.

Insurance groups haven't been confirmed for the Tesla Model 3 as yet but it's likely the speed of four-wheel drive versions will see them sit in the same group 50 (out of 50) as the larger Tesla Model S. Insurance could be higher than for rivals, so it's worth checking first.

Every Tesla comes with a reassuring four-year warranty, although its 50,000-mile cap is slightly lower than the industry standard. However, this is mostly offset by separate eight-year/100,000-mile coverage (120,000 miles for Long Range models) for the electric motors and battery pack.

There's a Tesla Maintenance Plan for owners that ensures the car is checked, interior air filters are replaced and brake fluid is tested and replaced when necessary. However, maintenance should be less than for a conventional petrol or diesel model and Tesla even states that the warranty remains even if servicing isn't carried out.