The Tesla Model S is fast and unusual to drive, whichever version you choose 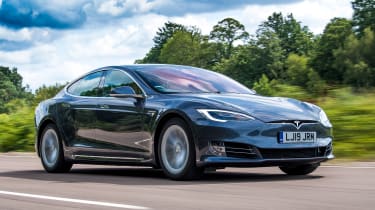 Because the Tesla Model S is powered by an electric motor, it rockets away from a standing start – and with no gearshifts, it's incredibly smooth to drive. It's also eerily quiet, emitting just a low whir accompanied by road and wind noise.

Although 19-inch alloy wheels are standard, 21-inch turbine-style alloy wheels are a popular option for the Model S – although they're expensive at just over £4,000. An early 2019 update saw the introduction of new fully adaptive damping for the air suspension system, that automatically senses the road conditions and driver's inputs. This means it can soften to help soak up bumps and sharpen up when tackling a windy road. It's the most comfortable version we've tried, and tyre roar on 19-inch wheels also seems to have been reduced by the new adaptive setup.

The floor-mounted battery pack gives the two-tonne Model S a much lower centre of gravity than a conventional car, giving it an advantage over BMW and Porsche rivals. It grips securely, particularly thanks to its dual-motor, four-wheel-drive setup, and corners with barely any body lean, with its traction-control system working hard to deploy all that power effectively. The steering feels weighty - and better than the Model 3 - but its lack of feel won't excite enthusiasts and the Model S feels too big and heavy to relish on a twisty road. Here, a Jaguar I-Pace is more fun to drive.

All models feature ‘smart’ air-suspension, which automatically adjusts depending on your speed. The car’s ride height can also be increased to help with entering garages and going over speed bumps – or to make it easier to get in and out.

Another feature of the Model S is regenerative braking, which harnesses the energy created during braking and sends it back to the battery to improve your driving range. The downside is that whenever you aren’t accelerating, the Model S can slow down unnervingly quickly, but once you become accustomed to this, you'll find you don't have to brake as often as you do in a normal car.

Fortunately, you can also adjust the amount of regenerative braking provided – less makes the car better to drive, while more increases the amount of charge put back into the battery. And you can see how the energy is being used with a handy digital display on the dashboard. 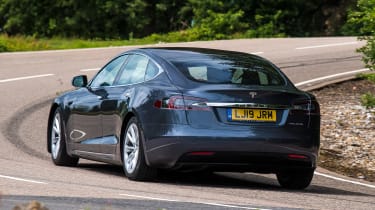 As you move up the range, the Tesla Model S grows progressively faster. Key to their appeal is the way they respond instantly to your accelerator input – electric motors can deliver 100% of their power as soon as you move off, unlike a petrol or diesel, which has to build up engine revs.

The entry-level model, named Standard Range, has now been discontinued. The Long Range Plus model uses four-wheel drive and can cover 0-60mph in just 3.7 seconds, showing there's still a gulf between it and the Jaguar I-Pace' 0-62mph in 4.8 seconds.

If that’s not quick enough, take a look at the Performance model, which can do 0-60mph in 2.3 seconds. As part of a software update in early 2020, Tesla introduced a ‘Cheetah Stance’ mode, which puts the car into an optimal setting for accelerating from a standstill. When activated, the nose of the car lowers and the suspension is adjusted. Along with this hypercar-matching acceleration, the Performance model has a maximum range of 396 miles.

In our time with the Performance (before the 2019 updates), the best time we saw after a dozen attempts was 3.3 seconds to 62mph – very impressive but a little adrift of the claims. We were amazed by its acceleration when passing slower traffic, though – surging from 45-65mph is claimed to take just 1.2 seconds and we have no reason to doubt it. The Model S is also a great cruiser, because it's quiet and refined, and the suspension does a decent job of smoothing out rough roads.