If anything belies the idea that electric cars are slow, it’s the Tesla Model X 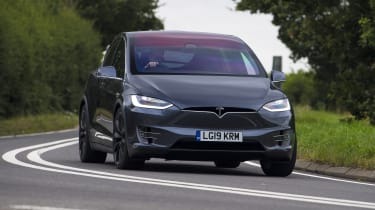 Despite the fact that it’s a heavy car (weighing in at around 2,300kg), the Model X is satisfying and rewarding to drive on challenging roads. It could never be described as agile, but doesn’t suffer the lumbering, roly-poly feel of most large SUVs. This is thanks to the batteries sitting as low down as possible in the body, which means the Model X has an extremely low centre of gravity, minimising body lean in corners.

As all models use Tesla’s dual-motor, four-wheel-drive configuration, there’s loads of traction on greasy roads or loose surfaces and you can carry a lot of speed through corners without losing confidence. There’s a lot of technology at your disposal to keep the Model X on an even keel, including ‘smart’ air suspension linked to the car’s sat-nav system. This can vary the car’s ride height depending on speed and the kind of surface you’re travelling on.

It’s a shame, then, that the feel from the Model X’s electrically assisted steering is rather unconvincing and artificial – akin to a computer game. Although accurate and controllable, you have to rely on your eyes and ears to gauge when the Tesla is close to its limits.

Whichever version of the Tesla Model X you go for, you’ll have an exceptionally quick car on your hands. The Long Range Plus model can cover 0-60mph in 4.4 seconds. Top of the tree sits the Performance, which has a ‘Ludicrous mode’ to enable 0-62mph in a jaw-dropping 2.6 seconds. A software update in April 2020 added ‘Cheetah Stance’, which lowers the nose of the car and adjusts the suspension to improve performance for standing starts. Its wealth of performance abilities comfortably make the Model X Performance the fastest SUV ever built, yet one with a reasonable 340-mile range between charges. 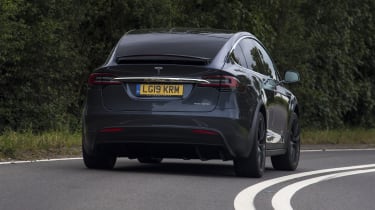 Although the initial rush of acceleration is quite an experience, it isn’t quite so dazzling once you’ve reached cruising speed. At normal speeds, the car’s overtaking ability on the motorway doesn’t feel massively better than that of a powerful diesel or petrol car. The surge from 40-70mph, though – a speed range that covers overtaking slow traffic on single-carriageway roads, for example – is really very impressive.