There's no getting around the fact that the Tesla Model X is an expensive car to buy, whichever version you choose. Prices for the Performance Range start at around £86,000, making it considerably more expensive than most of its established luxury rivals. Meanwhile, the price of the top-spec model puts it north of £100,000 if you choose the Ludicrous Performance option. Combine this with the fact that the Model X no longer qualifies for the government's plug-in car grant, as it costs more than £50,000, and cost becomes an issue that holds it back from getting another star in our ratings.

Of course, the Model X’s electric luxury-car status makes it a fairly unique product for the time being at least, so wealthy eco-conscious owners may not be put off by the price. Although it's out of reach of many car buyers, the Model X’s negligible running costs will help balance out the high price for those who choose a Tesla. 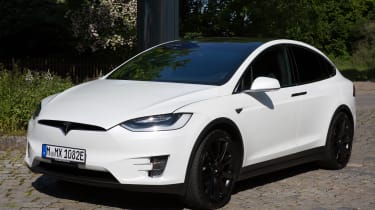 With its long range and absence of any exhaust emissions, the Tesla Model X certainly has what it takes to save money on running costs compared to a conventional petrol or diesel SUV. However, its high purchase price places it out of reach of many motorists.

There’s one type of user for whom the high purchase price of the Model X might not matter – the small percentage of business drivers whose company-car allowance will stretch to the Tesla’s £87,000 taxable (P11D) starting price. If you belong to this rather exclusive club, it’s well worth considering the Model X 75D against premium seven-seat diesel SUVs such as the similarly priced Mercedes GLS 350d or Range Rover TDV6 – if only for the huge saving you’ll make on company-car tax.

A total absence of CO2 emissions means the Model X will cost nothing in Benefit-in-Kind (BiK) company-car tax for 2020/21. This means it’ll cost massively less to run than the aforementioned GLS 350d – the latter’s 208g/km CO2 figure places it in the top BiK bracket, attracting the highest company-car tax costs.

Once the purchase cost of the Model X is out of the way, private owners can look forward to some serious savings compared to petrol or diesel SUVs of the same size – most notably a much reduced fuel bill. Electricity is far cheaper than petrol or diesel and all models have an impressive range. This means you’re not limited to short urban trips within dashing distance of a recharging point.

The Long Range and Performance models in the Model X range have the same battery size, but varying power outputs and maximum ranges. The 100kWh battery pack of the Long Range has a 314-mile range but the Performance model only manages 301 miles. An overnight charge will cost only a few pounds.

It should be remembered, though, that the car’s actual range will vary between drivers. Tesla admits that range will vary depending on cruising speed, outside temperature and whether your air-conditioning is switched on or off. However, with increasing numbers of fast-charge points appearing at motorway service areas, a mid-journey charge can be scheduled during a lunch stop, making long-haul family road trips a possibility – something not all electric cars can offer. The ever-growing Tesla Supercharger fast-charge network can top the Model X to 80% within half an hour and owners receive 400kWh of Supercharger credit as part of the package.

Along with an exemption from standard road tax, the Model X is also exempt from the annual surcharge payable on cars costing more than £40,000.

Perhaps due to high repair costs and the Model X’s brisk performance, all versions occupy insurance group 50, the highest banding there is. This compares to the group 45 rating of diesel Range Rovers, although the Mercedes GLS 350d is also placed in group 50. It’s certainly worth obtaining an insurance quote before you decide to buy.

Tesla offers an impressive warranty for all cars supplied in the UK, although it’s supplied by AXA insurance rather than Tesla itself. It’s a four-year/50,000-mile policy, while the battery and drive units are covered separately with an eight-year/unlimited-mileage warranty. The main warranty can be extended for up to a total of eight years.

Tesla states that its cars require less mechanical servicing than conventional petrol or diesel models, but recommends an inspection every 12,500 miles – or yearly, whichever is the more frequent. Maintenance plans are available to help spread the cost of. Software updates can be performed during scheduled maintenance appointments, or downloaded ‘over the air’ by the car’s on-board internet connection. Tesla suggests that you connect your vehicle to your home’s Wi-Fi network for the fastest possible download time.