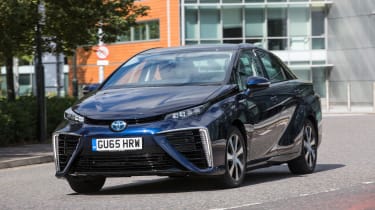 The Mirai is a four-door, four-seater saloon car that from the outside looks about the same size as a Ford Mondeo, but it isn’t massively roomy inside. Its boot is the size of a small family car’s and passengers in the back in particular will find things a little tight. There’s plenty of cubbyholes for your odds and ends in the cabin, though.

The Mirai’s steering wheel adjusts for both reach and rake and it comes fitted with eight-way power-adjustable seats as standard, so you can easily find the most comfortable driving position (and store it using the seats’ memory function). Great visibility through the large windscreen adds to the Mirai’s superb ease of driving.

When you’re getting in or out of the car, the seat and steering while slide back out of your way automatically to give you more space. Rear-seat passengers don’t have things as easy, though: both head and legroom are in short supply, the former due to the car’s swoopy roofline. 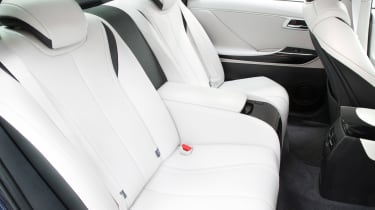 In-cabin storage is well catered for in the Mirai, with a glovebox, a box in the centre console that doubles up as an armrest, door bins that can squeeze in a half-litre bottle of water, an overhead storage box, seatback pockets for maps or magazines, cup-holders and a box in the rear-seat armrest.

The Mirai has a 361-litre boot – just a bit larger than a Ford Focus hatchback’s, but 20 litres smaller than what you get in a Volkswagen Golf. The Mirai is the same size as a VW Passat and Ford Mondeo, though, so its boot size is disappointing in comparison. It’s wide and low, and a little shallow, while the space normally used for storing a spare wheel is where you’ll find the hydrogen tanks.

We have no exact information right now on the Toyota Mirai’s towing capacity – but it’s possible that, like some electric cars, it won’t be suitable for towing at all.