The Toyota Prius+ is easy to drive around town, but has enough pace for the motorway

The Toyota Prius+ is based on the previous-generation Prius. That means the general driving experience is more relaxing than racy – exactly what the majority of buyers want.

It has supple suspension that makes the Prius+ a comfortable driver on a long journey or around town. And good visibility makes the latter particularly easy, despite a small increase in width and a generous increase in length over the current Prius.

It’s a different story when the speed increases. The light steering that makes round-town driving a doddle lacks feel and reducing confidence when cornering on faster roads. The soft suspension that’s a boon around town means the Prius+ has a tendency to lean when tackling those bends as well. 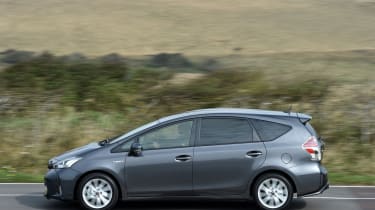 The Prius+ is powered by a 1.8-litre petrol engine developing 98bhp, which is supplemented by an 81bhp electric motor. However, due to the vagaries of calculating total power, the Prius+ is actually rated at 134bhp. That sounds like a reasonable amount, but performance is blunted by the car’s 1.5-tonne weight.

This translates to a 0-62mph time of 11.3 seconds and a top speed of 103mph. By comparison, the smaller, five-seat Kia Niro covers the benchmark in 11.5 seconds and has a 101mph top speed.

The main difference between those two models is the gearbox. In the Niro, the more common dual-clutch automatic is more relaxed under acceleration. The CVT-type automatic in the Prius+ sounds frenetic when overtaking as the engine’s revs soar. It makes pulling onto slip roads an uncharacteristically noisy affair.

Four driving modes are available. EV locks the car in all-electric mode at low speeds, until the accelerator pedal is firmly pressed or the battery starts to deplete. Eco mode sees the accelerator response blunted while the air-conditioning uses less energy.

In Normal mode, the Prius+ will run on electric power under light acceleration and constant low-speed driving. Power mode increases response from the accelerator, boosts power and improves acceleration.