The Toyota Prius+ lacks flair inside, but boasts plenty of equipment

A series of revisions have kept the interior of the Toyota Prius+ reasonably up to date, but it lacks much in the way of design flair and some might not feel comfortable with the centrally mounted instrument display.

When the previous Toyota Prius hatchback came out, its interior was considered to have a radical look. The Prius+ has an iteration of that, and while there’s little wrong with the ergonomics, it’s not amazing to look at.

The main instrument display sits centrally, so there’s nothing directly ahead of the driver. The rationale behind its location is that it requires the driver to refocus their eyes less. But the LCD readouts are like an eighties alarm clock, lacking the upmarket feel many buyers seek.

The stubby gearstick is somewhat of a Prius hallmark and most of the car’s controls are operated through Toyota’s Touch 2 touchscreen control. 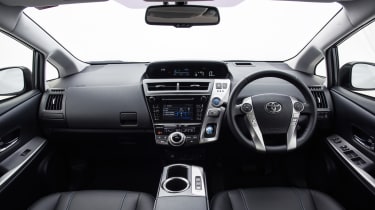 Two trims are available in the Prius+ range: Icon and Excel. The entry-level Icon is so well equipped, it’s our pick of the range. 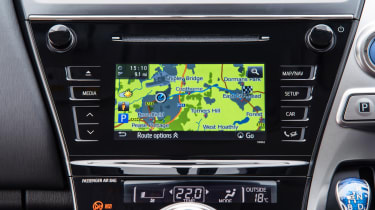 Toyota Prius+ options are limited to the odd feature available on the next trim up, metallic paint (priced between £550 and £800) and two option packs.

These are the £350 Protection Pack, which adds worthwhile features such as a boot liner, mudflaps and a rear bumper protection panel. The £550 front and rear parking sensors are another worthwhile addition, although for a car costing around £30,000, they really ought to be fitted as standard.