A five-year warranty shows confidence in the Toyota Prius+

The Toyota Prius+ boasts a wide range of safety kit and it should be painlessly reliable to own.

Despite its complicated hybrid engine, there has only been one recall for the Prius+, affecting vehicles built from May 2013 until May 2014 and requiring updated software. With the exception of the uproar in the US – where a huge number of Toyotas were recalled for a potential sticking throttle – Toyota has one of the best reliability records in the business.

The Toyota brand was rated above average in our 2017 Driver Power owner satisfaction survey, coming 11th out of 27 manufacturers. Of the owners who responded, 11.5% reported experiencing a problem with their car at least once in the first year.

In recent years, the Prius+ hasn’t featured in the survey, but the closely related Prius hatchback model came in first out of 75 models in our 2019 Driver Power survey. This should provide further reassurance for anyone with concerns about the petrol/electric drivetrain and its reliability. 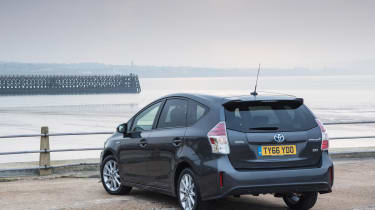 The Toyota Prius+ hasn’t been tested by safety specialists Euro NCAP, but the standard Prius on which it’s based has. The second-generation Prius scored a five-star rating in 2009, gaining an 88% score for adult occupant protection and 82% for child occupant protection. An 86% score for active safety equipment was impressive too.

There’s no criticising the safety kit fitted as standard to the Prius+. Driver, passenger, front side, curtain and driver’s knee airbags are fitted to all models, as is hill-hold control and Toyota’s Safety Sense systems. These include autonomous emergency braking (AEB), adaptive cruise control, lane departure alerts, automatic dipping headlights and traffic-sign recognition.