Sensible, spacious and comfortable it may be, but the Vauxhall Crossland X is no driver’s car

If you enjoy driving, you may wish to consider an alternative to the Vauxhall Crossland X – a conventional hatchback such as the Vauxhall Astra, perhaps. Because while the Crossland X has an increased ride height – very much en vogue at present – this causes as many problems as it solves.

The Crossland X is roughly 10cm taller than the Astra, so you and your passengers will find a vast amount of open space above your heads. This leads to a pleasant sense of airiness, but it causes a few issues. 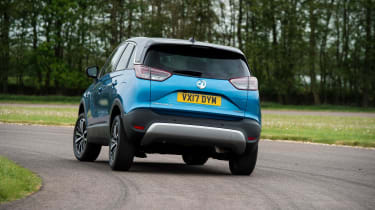 At cruising speeds, the Crossland X’s high profile translates into too much wind noise around the windscreen pillars, while strong winds on exposed motorways lead to more buffeting than you might be used to.

Turn off the motorway onto smaller roads and, while the suspension does a reasonable job of absorbing vibrations caused by poor tarmac, the Crossland X’s raised height means its body undoes the good work of the suspension, as the raised centre of gravity leads to the body swaying when travelling at speed over uneven surfaces.

The steering is very responsive and quick – a relatively small adjustment from your hand translates to fairly large movements from the car. However, you may find yourself wishing for a better resolved and more relaxed driving experience.

When it comes to combining comfort and agility, the Peugeot 2008 is a more balanced package. By comparison, the Renault Captur and Nissan Juke are by no means enthusiasts’ cars; but the Crossland X’s comfortable seats, excellent driving position and sound ergonomics feel a little undermined by the car's indecision on whether to be relaxing or sporty.

There's better news where the Crossland X’s engine range is concerned: the three-cylinder, 1.2-litre turbocharged petrol engine is easy to recommend thanks to its perky nature and broad spread of power throughout the rev range. This engine is available in two guises: 108 and 128bhp, with both now featuring a six-speed manual gearbox. Zero-to-62mph takes 10.2 and 9.3 seconds respectively, so both offer a decent turn of speed.

There’s also an entry-level 80bhp non-turbocharged 1.2-litre petrol engine, and while we haven’t driven a Crossland X in this configuration yet, we can’t imagine it’ll be much fun to live with. Acceleration takes a much more leisurely 13.6 seconds, so we’d recommend opting for a turbocharged petrol engine unless low insurance premiums are a priority.

If you’re in the market for a diesel Crossland X, you’ll get a 1.5-litre engine that produces either 101 or 118bhp depending on how much money you spend. The less powerful of these is punchy and quiet at low revs, but take it over 3,000rpm and both these attributes tail off, with too much noise and too little acceleration presenting themselves.