It’s all resolutely sensible inside, but that does give the Vauxhall Crossland X certain advantages

Despite the odd splash of coloured stitching and a nicely finished central dashboard panel, if you were to sum up the Vauxhall Crossland X’s interior in one word it would be ‘conservative’. Grey and black plastic are the order of the day and, save for the unconventional handbrake, all the controls are where you would expect them to be. 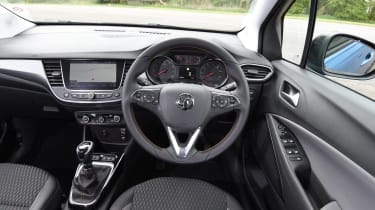 Interior quality is a mixed bag, with a nice ‘soft-touch’ dashboard top and a pleasant-to-hold steering wheel. The gearlever is too chunky, though, and its clear plastic top smears easily, making it look unpleasant.

There are also some cheap-feeling plastics lower down: the glovebox in particular feels thin and brittle. It’s damped to open softly, but its light weight means this happens too slowly; you may wish to override the mechanism and pull it open in frustration, but it’s too light for its spring, so it rebounds on its action if you do this.

Vauxhall’s Intellilink infotainment system is genuinely impressive, though, offering physical shortcut buttons that are easy to access on the move. The optional sat nav, meanwhile, provides excellent mapping and clear instructional graphics for selecting the correct lane when leaving or staying on a motorway, but you have to pay extra for it on the lower trim level models. 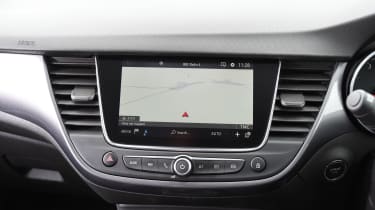 Business Edition Nav loses the stylish two-tone alloy wheels for smaller 16-inch versions, and doesn’t get the contrasting roof either. However, it does come with a handy array of extra kit: two-zone climate control, sat nav, auto lights and wipers, an alarm, two folding keys and rear parking sensors, all for around £300 more than the Griffin spec.

High-spec Elite cars come with 17-inch alloys and front fog lights, but like SRi Nav, getting sat nav costs over £1,000. Vauxhall’s trim levels and pricing are esoteric to say the least, but there’s only about £2,100 between the cheapest and most expensive versions. We’d stick with the Griffin or Business Edition Nav models.

There’s plenty of scope to add extra features onto your Crossland X. Adding front and rear parking sensors costs £240, while a rear-view camera pack costs £335 (non-Nav models) or £455 (Nav models) and a winter pack with heated front seats and a heated steering wheel costs £355. You have to pay £400 for a contrasting roof and door mirrors on Business Edition and Elite models, even though they’re standard with Griffin and SRi Nav. 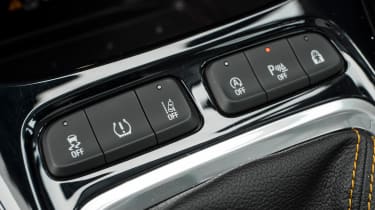 As the Crossland X comes with Apple CarPlay and Android Auto as standard, it probably makes sense to plug in your phone and use a navigation app on that, saving yourself several hundred pounds in the process. It just seems a shame to do this when Vauxhall’s sat-nav setup is so impressive. The £375 Versatility Pack (see the next section) is good value, though.